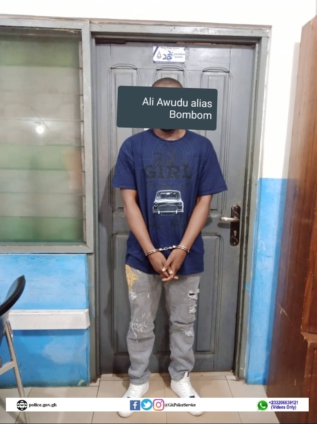 The Police have arrested one of the suspected kingpins in the Mamobi-Nima riot and the leader of the ‘Bombom gang.’

Announcing the arrest on their Facebook page on Sunday, the Police said, Ali Awudi, who has been on the run since the violent clash in January, was arrested at Aflao through an intelligence-led operation.

His arrest means that the leaders of the two groups are both in Police custody.

In a similar intelligence-led exercise, suspect Ibrahim Hussein, alias Kumodzi, leader of the Kumordzi group was earlier arrested on February 4.

On January 18, 2022, there was a violent clash between youth groups in Mamobi and Nima.

The timely intervention by the Police averted what could have been bloodshed following the violent clash.

Out of the five, three of the persons were seriously injured, he said.

So far, 14 suspects have been arrested in connection with the incident.