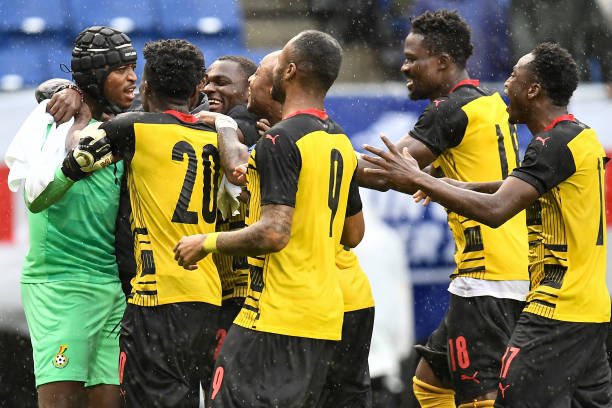 The Black Stars of Ghana have finished third in the 2022 edition of the Kirin Cup after beating Chile on penalties.

After end-to-end stuff in regular time which saw Otto Addo’s side finish the game with nine men, the Stars secured a 3-1 win in the shootout to clinch the third position courtesy of a big performance from Abdul Manaf Nurudeen.

The Black Stars put in a much better performance in the game against the South Americans compared to their opening match against Japan.

Otto Addo made changes to his starting line-up with Nurudeen replacing Lawrence Ati-Zigi in post while Baba Rahman, Felix Afena-Gyan and Benjamin Tetteh were all given starting berths.

Both teams were unable to take advantage of the opportunities that came their way with Ghana registering two shots on target.

The second half started on a better note as well for the Black Stars with skipper Andre Ayew forcing decent saves from the Chile goalkeeper.

However, Alidu Seidu and Mubarak Wakaso were given an early shower after being shown red cards in the second half of the game.

The Clermont Foot defender was shown the exit for a rough challenge on his opponent after a VAR review while Wakaso was given his marching off orders after confronting the referee, who failed to award him a free-kick after he was fouled.

Ghana played the last 12 minutes of the game with nine men following the red cards.

With just minutes until the end of regular minutes, Mohammed Kudus also came close to sealing the victory for Ghana but Perez Kirby was once again on hand to deny the Ajax star.

Manaf Nurudeen made two saves in the shootouts to ensure the Black Stars earned victory on the day.

Addo and his men are expected to Ghana after a successful tournament bringing an end to their international break.