The Lunar New Year — the most important festival in the Chinese calendar — is just three days away, but in the Chinese city of Wuhan, there are few reasons to celebrate.

A deadly outbreak of the new coronavirus emerged in this city of 11 million people last month. Within weeks, the virus has killed nine people, sickened hundreds and spread as far as the United States.

Wuhan has been on high alert since the number of confirmed infections surged into the hundreds earlier this week.

New year celebrations that had been expected to attract hundreds of thousands of people have been canceled. In some parts of the city, including a major shopping area, streets remain largely empty, with most people walking outside donning face masks.

In the city’s center, the Huanan Seafood Wholesale Market sits empty, its rows of stalls shuttered. Police and security officers in face masks stand guard outside, prohibiting anyone from filming or entering a cordoned off area.

The market has always been a popular spot at this time of the year, packed with shoppers stocking up on fish and seafood for Lunar New Year feasts with family and friends.

But this year, Chinese authorities and scientists say wild animals sold at this market are the likely source of the new strain of coronavirus, which is in the same family of viruses as the deadly severe acute respiratory syndrome (SARS).

The virus — which can infect humans and animals — has since spread to Thailand, Japan, South Korea, Taiwan and the United States. Officials in Washington state confirmed the first case on US soil Tuesday.

The market has been closed since January 1 for disinfection, but health authorities have not found out which animals are the source. 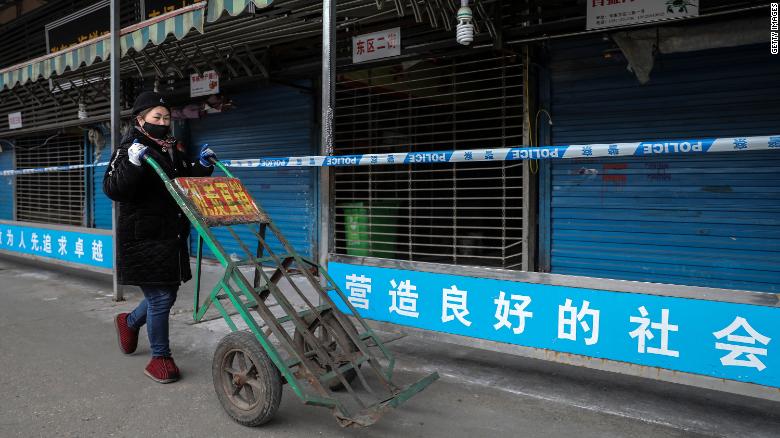 The closed Huanan Seafood Wholesale Market has been linked to the coronavirus outbreak in China.

‘How can I not be worried?’

Not far from the Huanan Seafood Wholesale Market, Xiao Chuan’an, from a neighboring city, is selling sugar cane she imported from southern Guangdong province.

The country’s National Health Commission confirmed this week the virus can be transmitted between people, after Wuhan health authorities maintained for two weeks that there was “no clear evidence of human-to-human transmission.” 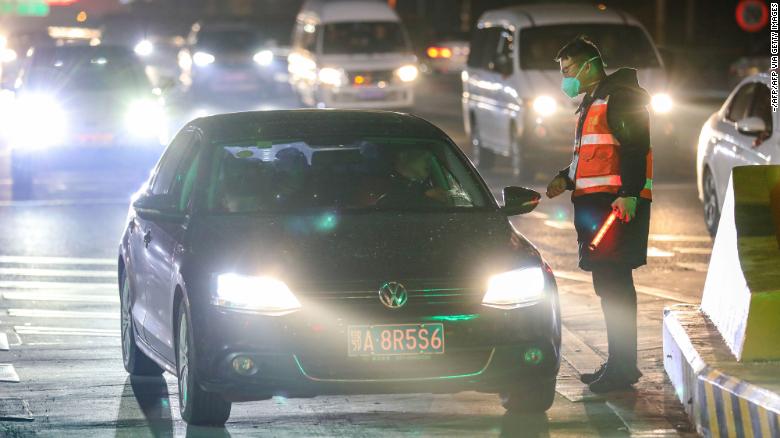 A staff member talks with a driver as he checks the body temperatures of passengers at an exit of a highway in Wuhan on Tuesday.

In Hubei province, where Wuhan is located, 270 people have been infected as of Wednesday, and nine of them have died, according to the commission. At least 453 cases had been confirmed throughout China, leading to fears of a possible epidemic.

Xiao said her family had repeatedly urged her to go home, fearing that she will catch the virus in Wuhan. But she wants to stay to sell the sugar cane. However, business has been bad — people are too scared to come to the market to shop, she said.

“You can see now — does it look like the atmosphere of Chinese New Year?” she said. “I don’t know when the pneumonia epidemic will stop… I might have to eat instant noodles during Chinese New Year.” 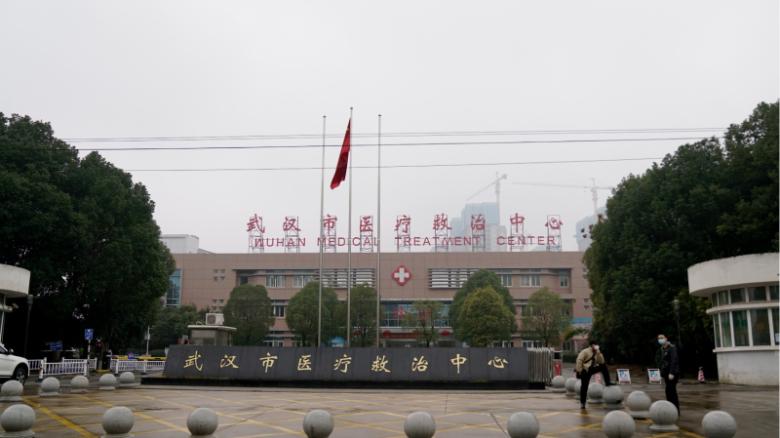 A hospital in Wuhan, where China’s coronavirus outbreak first emerged.

The city government announced a series of new measures Tuesday to contain the outbreak — efforts some critics say came too late — the virus has already spread to a dozen provinces across the country.

Tour agencies in Wuhan have been banned from taking groups out of the city. Infrared thermometers have been installed at the airport, train stations, coach terminals and passenger piers to measure the temperatures of passengers departing the city since January 14, according to state media. 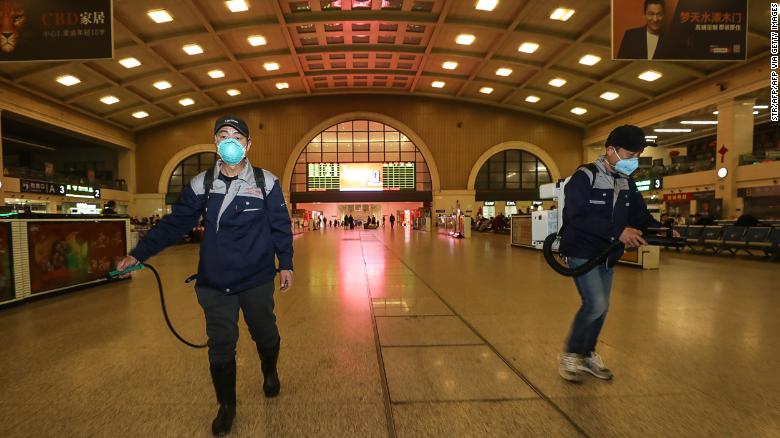 The city has over 60 routes connecting Wuhan with international cities, including direct flights to New York, San Francisco, Sydney, Paris and London, as well as over a hundred internal flights to other major Chinese cities. It is also a hub for the country’s high-speed rail network.

At the high-speed rail station, the only faces that stand out are the uncovered ones, with the vast majority of passengers donning masks. As they prepare to exit the station, a railway staff member — also wearing a mask and gloves — puts a thermometer at the head of each passenger, checking for a fever. 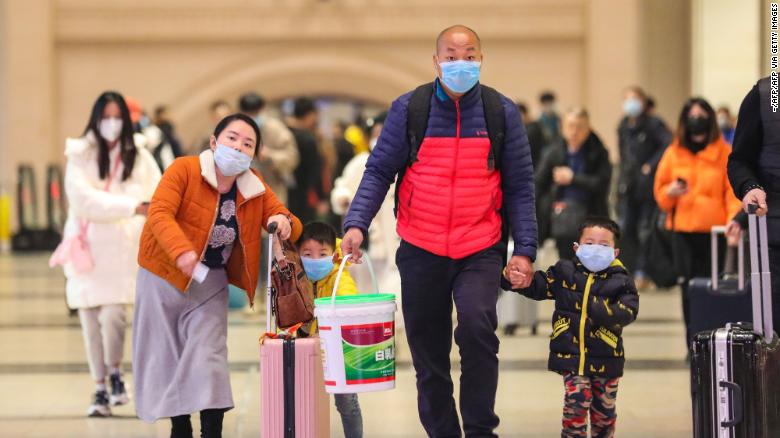 On a high speed train from Beijing to Wuhan, railway attendants and security guards left their faces uncovered. A train attendant told CNN they were asked by management not to wear masks, as it may trigger a panic among passengers.

But she added that the train company is preparing to purchase masks and they will begin wearing them should the situation worsen.

Some hotels in the city said they will also screen guests, checking their temperature and asking them to sanitize their hands upon entry. 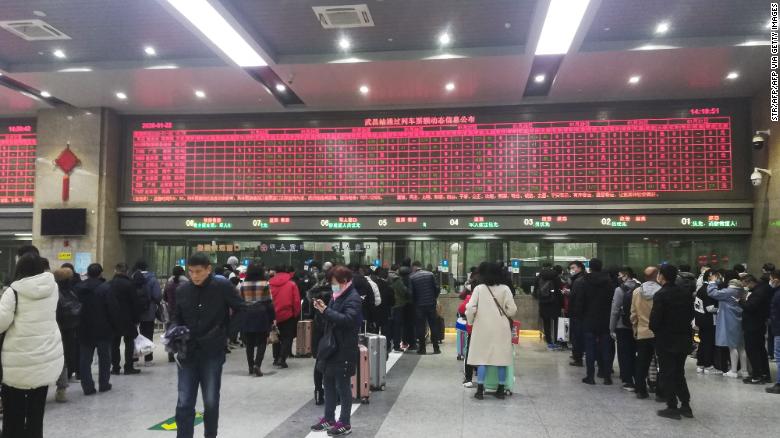 Commuters wait in line at Wuchang railway station in Wuhan on Wednesday.

On Wednesday, the general manager of the Westin hotel in Wuhan told CNN he had asked staff to start wearing face masks “for both their safety and for the safety of our guests.”

Others, however, are less worried about the outbreak. Yan Weixi, a jackfruit seller who did not wear a mask, said she did not find the situation “so scary.”

“I have been checking online instructions… like drinking more water or washing your hands more frequently. I think that should be fine,” said Yan, from northeastern Heilongjiang province, who is spending her first Lunar New Year in Wuhan.

“The most important thing is to keep a positive attitude, because if you’re more scared, it’s more likely you would catch the virus,” she said. “That’s my opinion.”