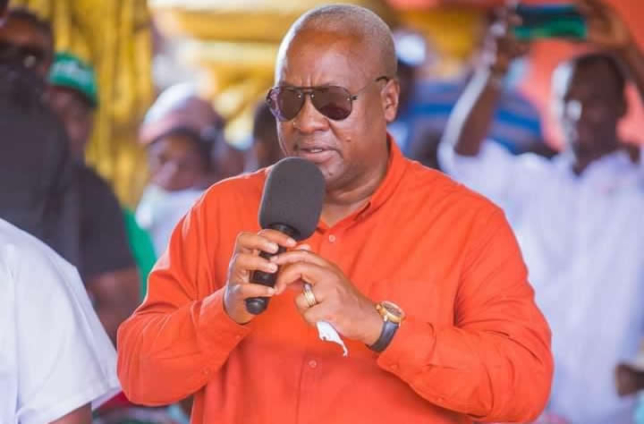 The flagbearer of the National Democratic Congress (NDC), has taken his “People’s Manifesto Campaign Agenda” to Krowor, Ledzekuku, La Dadekotopon and Klottey Korle Constituencies in the Greater Accra Region.

During the tour, Mahama paid courtesy calls on the Nungua Mantse, King Noble Odaifio Welentsi III at his Palace in Nungua and the Elders of the La Traditional Council at their Palace in La.

He also visited the Osu Mantse Nii Okwei Kinka Dowuona VI at his Palace in Osu to seek their blessings for the December 7 general elections.

John Mahama also addressed mini rallies in each of the four constituencies.

He appealed to voters to vote for him and the NDC Parliamentary candidates on December 7 to enable them to rescue the country from the governing New Patriotic Party (NPP).

John Mahama said the main agenda of his next administration was youth empowerment through job creation.

He stated the next NDC government would provide opportunities for the youth to acquire free technical and vocational skills to enable them to go into entrepreneurship.

He said his next Government would implement a free National Apprenticeship Programme by establishing centres in Technical and Vocational Education and Training (TVET) institutions in districts.

This is to provide free training and sponsor the youth for free apprenticeship training with certified master craftsmen/women.

John Mahama assured the constituents that his next government would maintain and improve the free senior high school (SHS).

He added the double-track system would be brought to an end within a year of his assumption of office.

He said the next NDC government will also implement free primary healthcare to provide quality health care for all Ghanaians.

He noted that under the free primary healthcare, one would need the Ghana Card to access it.

Mr Mahama, who also interacted with members of the Nungua Association of Garages, told them that his next administration would ensure that garages in the country had clinics to provide health services for the artisans.

He noted that his next administration would ensure that garages had electricity, water and good roads.

He said they would ensure that the premises of garages were well refurbished and that they would work with the garages to provide training for artisans.

DISCLAIMER: The Views, Comments, Opinions, Contributions and Statements made by Readers and Contributors on this platform do not necessarily represent the views or policy of Multimedia Group Limited.
Tags:
Election 2020
John Mahama
NDC