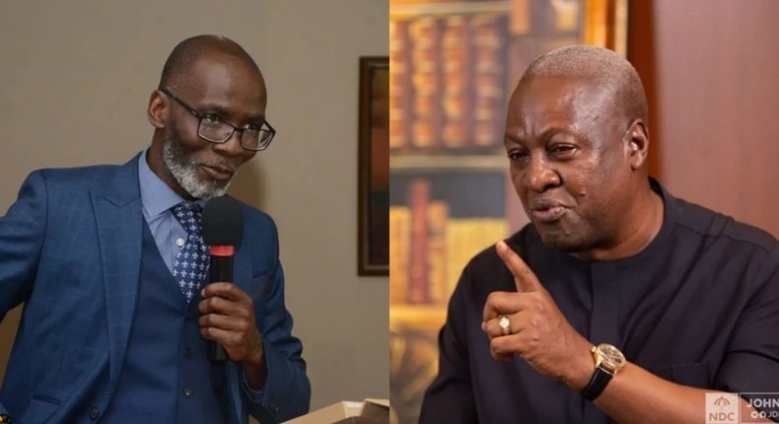 Founder of Danquah Institute, Gabby Otchere-Darko has reacted to the recent comments of former President John Mahama on the current state of the country’s economy.

Taking it to his Twitter page on Tuesday, the outspoken politician likened Mr Mahama’s criticisms of the Akufo-Addo government to a stammerer complaining about how musician, Sarkodie raps in his music.

While apologizing to stammerers, Mr Otchere-Darko noted that the 2020 Presidential Candidate of the opposition National Democratic Congress (NDC) lacks the moral rights to comment on economic issues.

Lately, the former President has been criticising the Akufo-Addo government for failing to “boost the economy” as it promised in 2016.

Prominent amongst them is when Mr Mahama, resurrected an old radio interview of Vice President Dr Mahamudu Bawumia lashing at his government for introducing some new taxes.

Having watched the interview again, he took to Facebook page to say: “Hmm! Talk is indeed, cheap.”

Listening to John Mahama preach on the economy is like hearing a stammerer (apologies to stammerers), not only boldly criticising @sarkodie’s rap, but trying to convince music lovers that @sarkodie must learn to learn how to verbalise from him, the stutterer.

But as the leading member of the ruling New Patriotic Party (NPP), he believed that Mr Mahama failed to solve the economic crisis whilst in power from 2012 to 2016.

Therefore, the former President should desist from commenting on the modus operandi of the Akufo-Addo government.

“Listening to John Mahama preach on the economy is like hearing a stammerer (apologies to stammerers), not only boldly criticising Sarkodie’s rap, but trying to convince music lovers that Sarkodie must learn to learn how to verbalise from him, the stutterer,” he tweeted.

Reading your tweets about good governance and empathy for the masses is like hearing a harlot (no apologies to harlots), not only chastising a rape victim for getting pregnant but for dressing provocatively. Such thickness you would agree, no?🦁 https://t.co/DXFquqPIZC

But in a sharp rebuttal, the Ningo-Prampram MP compared Mr Otchere-Darko’s “empathy” for the masses to that of hearing harlots for “not only chastising a rape victim for getting pregnant but for dressing provocatively.”

You are such a disgrace to the country. Do you think we voted you in power to compare us to the prior gov’t? https://t.co/5YTkyb8866

While others reprimanded the outspoken politician for his indifferent and reactive posture towards Mr Mahama, some believed that violence will not make things better.

Will you keep quiet https://t.co/XY4RP2CjR0

Very unfortunate to use a peoples disability in a vain political redicule. What kind of leaders do we have in Ghana? https://t.co/Yzx7n18QqH

The harder I try to ignore this guy, the harder he makes it. John Mahama was no saint but Nana Addo is just all ego bundled with bad policies, corruption and incompetence…. Of course, your belly is full so anything goes. Nothing last forever. https://t.co/BGPJGP77kz

My guy, at this point in time, it’s no more about political banters anymore. The economy is in shambles. We need to find a way to salvage the situation. The Mahama you are touting had his worst being your uncle’s best. Be wise https://t.co/pdRICwId2g

Your uncle is bathing in our skies at $14k per hour and even he has been given the mandate to run this country. Where’s the $560m? https://t.co/7Etxnf1GFA

Keep quiet and enjoy the national cake in peace, don’t insult us on top of it.. we beg you https://t.co/VxvYCk9GMv

The wise know there is much they don’t know.

Only fools believe they know everything.

I advise u then not to be a fool by believing u know everything. https://t.co/4dxNuOnDLN

What makes you think you and your abysmal government are doing any better? https://t.co/q3JQnjH9aJ

Forget the grammar, what is the sense in what you saying?
Kenkey on the streets is 3gh, fuel is ¢7+, you can’t pay NABCO, lecturers on strike for over 3weeks, $1 is ¢6.3, you think using SM to write sh!t is what we want?
Go talk to your uncle, make he get serious.

U no talk anything!! U guys no dey see top one bit.. Relax!! https://t.co/YoWxCRsplR