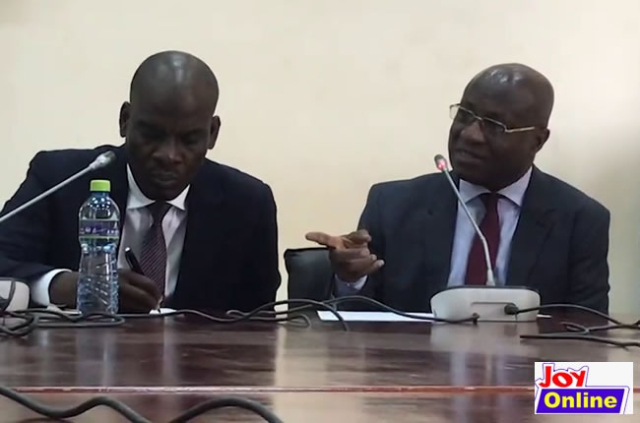 The Majority and Minority Leaders have joined forces to defend the Speaker of Parliament after his warning to the parliamentary press corps left many media practitioners upset.

At a press conference organsied by both leaders in Parliament, they mounted a defense for the Prof Mike Oquaye and assured the media that the House has no intention of gagging the media or infringing on its constitutional rights.

Majority Leader, Osei Kyei-Mensah-Bonsu said at any place, even including media organisaitons, there are rules and the Speaker was only requesting for the rules of Parliament to be respected.

“…so if the Speaker believes that something untoward is happening and calls your attention to it, I don’t honestly want to believe that that can be construed to mean the Speaker attempting to gag media houses,” he said.

He described the Speaker’s warning as a “friendly advice to us that primarily we are here for this, of there is something you consider abnormal happening and you want to follow up, fair and fine, except that in this regard he thought that it was behaviour that was out of sync with the general rules of your engagement.”

The Minority Leader, Haruna Iddrisu said Parliament has no intention to gag reporters or journalists, therefore the Speakers’ comments should not be misconstrued or misinterpreted as such.

“What he sought to do, probably, was to advise that while we are in session focus on considering matter within the chamber and that the various caucuses can hold their press briefing and press engagement before sitting and outside sitting,” he stated.

Mr Iddrisu indicated that his side of the House will not be party to any decision or initiative that will undermine the frontiers of press freedom.

“We all share with you that the values of transparency and accountability are better enhanced and deepened by a free press.”

Prof Mike Oquaye on Wednesday threatened members of the Parliamentary Press Corp with sanctions if they leave the chamber to cover press conferences held by members of either side of the House while proceedings are ongoing.

The stern warning by the Speaker follows a complaint by the Majority leader Osei Kyei-Mensah-Bonsu on the floor of the House.

In response, Prof Oquaye said “You are here as guests by my permission because of the importance this House attaches to the…profession. Any such deviation would make you an unwelcome guest and your welcome would be duly withdrawn.”

This has left media practitioners livid. The condemnation from Civil Society Organisations and the Media Foundation of West Africa has been loud.

Executive Director of Media Foundation for West Africa (MFWA), Sulemana Braimah, argues that telling journalists which activities they must cover amounts to censorship.

“I think that directive may border on censorship; and to some extent, deciding what the media should be covering or not be covering…is a very worrying development,” Mr Braimah told Joy News.

DISCLAIMER: The Views, Comments, Opinions, Contributions and Statements made by Readers and Contributors on this platform do not necessarily represent the views or policy of Multimedia Group Limited.
Tags:
Haruna Iddrissu
Osei Kyei Mensah
Parliament