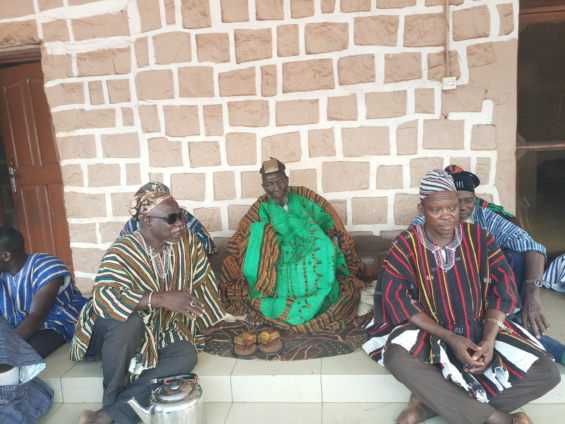 The overlord of the Mamprugu traditional area in the North East Region, Naa Bohagu Abdulai Sheriga II, has appealed to government to complete the ongoing water projects in Nalerigu, Gambaga and Walewale townships to assist in the fight against the spread of COVID-19.

According to the overlord, further delays in completing the projects in these three major towns could affect the smooth implementation and enforcement of the President’s directives as well as other precautionary measures such as staying indoors and hand washing.

Addressing the residents at his palace in Nalerigu Thursday morning, Naa Bohagu also thanked the president for the stringent measures in place to contain the coronavirus from spreading and pledged his fullest support.
“I wish to state categorically that this kingdom respects the directives and fully endorses its implementations”, the overlord declared.

In a prepared statement read by  Mba Tarana, the senior-most elder at the palace, the overlord stressed that all forms of political, religious and social gatherings, including funerals and even birthday parties, have been banned.
“Inline the chief Imam’s directive, that all daily and Jumaah Congregational prayers are suspended even though the adhan can be called, I urge all Muslims to abide by the directive. All funerals, weddings, outdoorings are suspended and all sons and daughters returning from abroad or any other locations must subject themselves to the minister of health guidelines.

The North East Region has for many years been facing acute perennial water scarcity, particularly during dry seasons, forcing the residents to always rely on untreated water from outdoor taps, boreholes, uncovered wells, ponds and rivers.

The residents in dry seasons often turned to delivery trucks and tricycles that bring water from elsewhere for them to buy for consumption.
This necessitated the government to commence the water supply projects in 2018 as part of a $45 million loan facility it secured from the World Bank.

President Akufo-Addo who announced the commencement of the project to the chiefs and people in the area had said, about 35,000 gallons of water and over 300 household toilets will be added.

Expected to be completed last year, the projects has, however come to a long standstill.

In his second address over the coronavirus pandemic,  Naa Bohagu said the  only source of water, which is a small river at the outskirt of the town, for residents in the regional capital is almost dried up.

He said lack of clean water will hinder the effective fight against the coronavirus pandemic and pleaded with the contractor to speed up works .