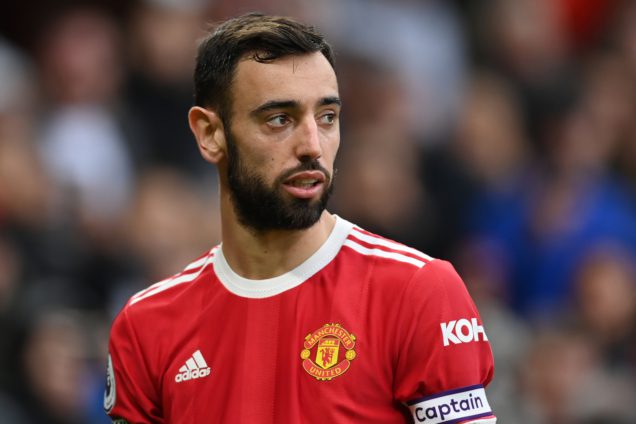 Manchester United’s players need to “look in the mirror” because they are “not at the same level” as their Manchester City counterparts, says midfielder Bruno Fernandes.

The gulf in class was clear as City cruised to a comfortable 2-0 derby win at Old Trafford.

“We have to speak less and do more,” Fernandes told Sky Sports.

“I am saying the same stuff. We have to change because this has happened many, many times already. What we did was not enough.”

Pep Guardiola’s side controlled possession, seeing 68% of the ball, but they also covered more ground and carried out significantly more sprints than their opponents.

It continues a theme of United’s players being found wanting against opposition that work hard in and out of possession.

‘We have to come out like a hurt animal’

A heavy loss at Leicester, coupled with successive Premier league defeats against two of the United’s biggest historical rivals have intensified pressure on both Solskjaer and his underperforming players.

While Saturday’s reverse to City was not on the scale of the humiliating result against Liverpool, United’s last home victory was against Newcastle on 11 September.

“It’s very disappointing. Last week it felt like we made a step forward, this is a big step backwards,” Solskjaer said, referring to their 3-0 win at Tottenham.

“It is a way of losing we don’t like. You want to see a better Man Utd than that. We have had a four-week period where we have been disappointing. We want to be on the front foot and we want to be aggressive. This was a big step back.

“Players are human beings. When you lose a game there is nothing better than winning a game. We have to come out against Watford like a proper, hurt animal. The international break has come at a good time for us.”