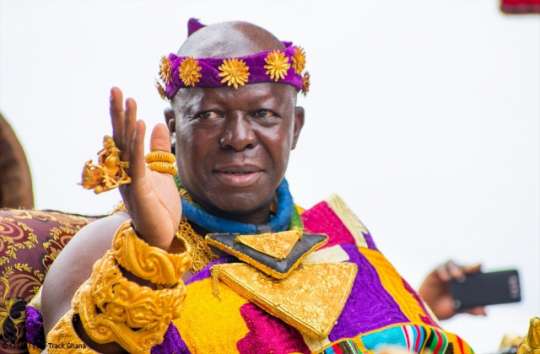 The Asantehene, Otumfuo Osei Tutu II has charged the National Road Safety Authority (NRSA) to arrest and prosecute road offenders even when they claim they come from Manhyia.

According to him, no one from his palace is above the law, and thus must be treated as the law requires when they err.

The Asantehene made this known when the National Road Safety Authority paid a courtesy call on him.

Among other things, they had informed him of instances where persons who had committed road safety infractions were not arrested because they claimed they are affiliated to his kingdom or work for the Asantehene.

But responding to these complaints, the Asantehene categorically stated that “Manhyia Palace has not given any stickers to drivers, so those drivers and vehicles are not above the law.”

He added that “My stickers and pictures are not licenses, so those drivers are not above the law on our roads. Whether the person is a chief or queen mother and driving a vehicle with my stickers without a license, arrest him or her.”

He stressed that his personal vehicles do not bear his stickers thus, those who have been using his stickers to evade arrest and prosecution should be arrested and made to face the full rigours of the law.

“When you arrest the vehicle and it comes to me that the vehicle is truly from Manhyia then we will all know what to do next. But don’t let any driver with my stickers believe that he or she is above the law,” he stated.