Meet the Nigerian artist illustrating the human experience with a ballpoint pen - MyJoyOnline.com 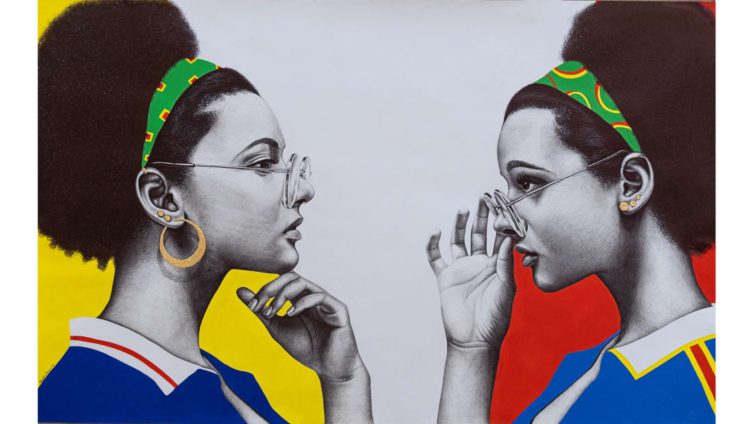 From a distance, Jacqueline Suowari’s larger-than-life portraits look like monochromatic photographs overlaid with colorful graphics. Upon closer inspection, you see these dramatic images are the culmination of thousands of tiny lines made using a simple ballpoint pen.

Suowari, 31, has been an artist since she was a child, practicing professionally for over a decade. She studied Fine Art at the University of Port Harcourt in southern Nigeria, and has participated in group exhibitions globally, and had solo exhibitions in Miami and Nigeria.

Her work has been featured in several publications including Chukwuemeka Ben Bosah’s book, “The Art of Nigerian Women,” which celebrates female artists from the Nigerian diaspora.

This June she launched a touring exhibition of her new body of work entitled “Now I Wear Myself.” In her new exhibition, Suowari considers the fetishization and condemnation of aesthetics associated with indigenous Nigerian cultures and tries to destigmatize subjects that are often taboo in the country, like depression, grief, and shame.

Philosophy with a ballpoint pen

As a child Suowari didn’t know whether to be an artist, a poet, or a dancer — so she decided to be all three. “Somehow, I’ve been able to merge all these things together to form the Jacqueline Suowari experience,” she laughed.

“I describe myself as a visual artist who specializes primarily with the ballpoint pen,” said Suowari. Her practice is a combination of intricate drawings paired with bold Afro-urban painted elements in poppy, primary colors. These works — often up to eight feet tall — are accompanied by poetry and performance art.

“With my drawings, I have this philosophy of layering — it’s just a way that I pattern my strokes upon each other,” explained Suowari. “I like to look at each stroke as the human experience. One experience, one stroke — and the gathering, and layering, and falling together of all the strokes creates the person and their character.”

Her mark-making process is painstaking, with most of her works requiring months of meticulous drawing.

The power of the pen

Suowari’s work is as motivational as it is aesthetically pleasing. Her huge creations share a message of hope and empowerment; their intention is to allow Nigerians to embrace vulnerabilities — encouraging them to discuss issues, including mental health, that she says aren’t in common discourse in Nigerian society.

“The Nigerian system kind of bullies you into shape,” Suowari said, adding that she’s trying to encourage people to be their authentic selves, whether that takes the form of acknowledging their own personal strife or joining huge political action, such as the EndSARS movement.

One of the pieces included in her latest body of work is an image of a woman wearing a traditional Ankara wax print dress and loosely styled dreadlocks. “One of the things that was the agitation for the EndSARS movement was the stereotyping of people based on their looks,” said Suowari. “In Nigeria, if a policeman should find a woman dressed like that in the night, they would say she’s a prostitute.”

Suowari said that her vast portraits represent the faceless, voiceless masses; she wants to tell the stories of the minority and ostracized individuals to give them strength.

“I believe that everybody was created with a particular blueprint. It’s like a puzzle — you’re supposed to be a certain kind of way to fit into the puzzle for better things to happen,” she explained. “We can’t make up this beautiful picture if everybody’s the same.”

Art for the greater good

Suowari’s latest collection, “Now I Wear Myself,” opened in Abuja on June 25. The exhibition will go on tour in October with the next showing in Lagos and further dates to be confirmed.

After a guest appearance on Rodney Omeokachie’s “The Young God” podcast following the launch, Suowari said she was overwhelmed with messages of thanks for openly discussing subjects that she feels are unnecessarily taboo in Nigeria.

“I think the artist is some sort of prophet,” she said. “Some sort of priestess, or pastor, or doctor that should be able to use their art as a tool to inform positive change in people’s minds.”

Suowari regularly receives emails from fans saying how her work has touched their lives. “I think for me that is the greatest achievement: being able to use your art as a tool to change people for the greater good,” she said. “To inspire people to be better.”