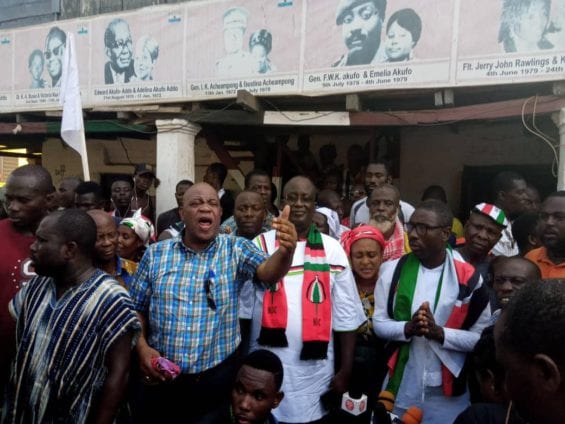 Founder of Winneba is King Movement, James Kofi Annan, has been introduced to people of Effutuman as the National Democratic Congress’ (NDC) Parliamentary Candidate for the Effutu.

This followed the resignation of Mr. Victor Nyankson a renowned legal Practitioner, who was elected at a delegates’ congress.

Earlier in the day, hundreds of the NDC supporters took to the streets of Winneba Township amidst music and chanting of the party’s slogan.

They later converged at the premises of the Party Office in Winneba, where Mr. Nyankson decorated Dr. Annan with the Party’s regalia and also raised his hand as the Parliamentary Candidate for the party.

Speaking to the gathering Dr, Annan who is also a human rights activist, applauded the Constituency Executive and all who contributed to his nomination and pledged to work to wrestle power from the NPP.

His vision is among others to rehabilitate the Winneba Water Works to address the perennial water shortage, extension of electricity to all rural communities and the provision of School infrastructure.

Dr Annan has sponsored the education of 100 young people from the primary to the various Universities and also enrolled several young men and women to learn various vocations, while others have been employed by his organisation.

He assured the entire people of Effutu of his readiness to lead the NDC with all his expertise to take back the seat from the NPP in order to restore the dignity and the peace of the constituency, the Aboakyer, Masquerading and Akomasie festivals which have been politicized all this while.

“I will not abuse the trust reposed in me, but uphold my dignity and credibility locally and globally”, adding that “as members of the party let rekindle the spirit of the party that together we will fight to be victorious.”

Earlier Mr Nyankson stated that his resignation was his personal decision and pledged to team up with the new PC and the entire Constituency to work to ensure success.

Mr. Abraham Henry Arthur, Effutu NDC constituency Secretary appealed to the members to put aside their differences since there was only one NDC in Effutu, see themselves as one people with a common Destiny.

He said it was about time they combined resources and expertise for effective organisation towards the victory of the party come December 2020.