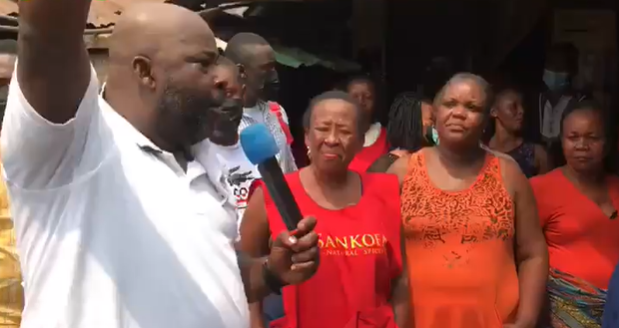 Member of Parliament for New Juaben South, Michael Okyere Baafi, has alleged that members of the Minority in Parliament have been urging their Majority colleagues to ensure the passage of the controversial Electronic Transactions Levy (e-levy) Bill.

Speaking to residents in his constituency in Akan during a town hall meeting, Mr. Okyere Baafi, noted that the NDC MPs have been publicly condemning the implementation of the Bill just to play to the gallery.

According to him, the legislators from the opposition party fear losing their parliamentary seats in the next general election, therefore, they reached a consensus with the Majority privately.

“I am a Member of Parliament and I sit with the NDC MPs in Parliament every day. You watch me every day on TV. When you see the NDC and NPP MPs on TV, we both agree.”

“The NDC MPs have agreed that the e-levy is good. They tell us that we should be determined and ensure the passage of the e-levy because it will help us if passed. But they cannot come and tell the public to accept the levy because if they tell you and come asking for votes, they will not be received.”

“The NDC MPs have been asking us to urge the public to accept the Bill. We those in Parliament are a few and they are our friends. So please let’s accept the e-levy to help us all,” MyJoyOnline.com translated.

During his interaction, the New Juaben South MP also indicated that if the E-levy Bill is withdrawn and the government resorts to the International Monetary Fund (IMF), the free SHS policy will be scrapped.

“If we don’t pay the e-levy and we go to the World Bank or the IMF for loans, they will ask Akufo-Addo to cancel the free SHS. This will affect your children so you must all accept the e-levy and pay it so it helps all of us,” Okyere Baafi stated.

Already, Finance Minister, Ken Ofori-Atta has assured that Ghana will not seek a bailout from the IMF but will resort to a “homegrown” alternative to boost the economy.

“I can say; we are not going to the IMF. Whatever we do, we are not… So let’s think of who we are as strong proud people, the shining star of Africa, and we have the capacity to do whatever we want to do if we speak one language and ensure that we share the burden in the issues ahead,” the Minister said at a townhall meeting in Tamale.

Since the introduction of the e-levy, the Minority has publicly expressed total condemnation and called on government to rescind this decision.

The government proposed a reduction of the rate from 1.75% to 1.5% but the Minority rejected the proposal.

Opposers of the tax policy have called for Ghana to subscribe to an IMF programme to deal with the current revenue challenges and investor concerns about the economy.

Some economists have argued that passing the e-levy is the solution needed to “fully restore” investor confidence and deal with the challenges of revenue mobilization.

According to a Joy Business report, the International Monetary Fund has indicated that it is ready to extend support to  Ghana if the request is made.

This was in response to an e-mail sent to the Fund by Joy Business over calls for government to seek IMF support to help stabilise the economy.

“As always, the IMF stands ready to support Ghana in any way deemed useful by the authorities,” parts of the mail read.

Meanwhile, government has suspended the withdrawal and re-laying of a revised E-levy Bill indefinitely.