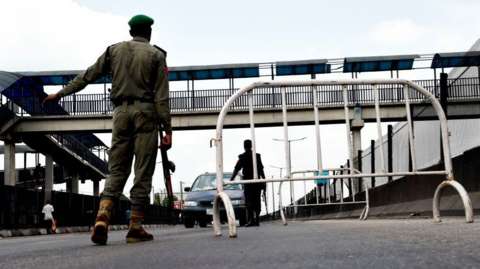 Domestic and sexual violence experts in Nigeria say they have seen an increase in the number of people asking them for help.

It comes as the United Nations warns of a shadow pandemic with rising reports of physical and verbal abuse in homes around the world because of coronavirus lockdowns.

The Lagos State Domestic and Sexual Violence Response Team says it has added extra handlers on its hotlines to cope with the amount of calls they are getting.

“They [victims] are literally walking on egg shells because they don’t know how their partner is going to react during this period. People need escape routes and now they’re stuck,” said Titilola Vivour-Adeniyi, the co-ordinator for the unit.

“We’ve had to engage the services of law enforcement and then to evacuate them from the abusive environment, and in certain instances we’ve been successful in removing the alleged perpetrator, the abuser, from the home.”

Finding numbers on exactly how many people are being abused in Nigeria is difficult, because so many don’t report or come forward.

“It’s like something that should never be heard of. In some communities, they’re also going to start seeing you as dirty or as a stranger, tainted basically. In some communities they actually go as far as performing certain sacrifices or certain rites in order to cleanse the survivor and that’s the only way the survivor can be accepted back into the community,” said Onono Anataku, a psychologist for Medecins Sans Frontieres in Port Harcourt working with sexual abuse victims.

Some of the few support centres that exist in Nigeria are still open and continue to try and help those who know about their work.

The UN says around 23% of women in Nigeria have been victims of physical or sexual violence by their husbands.

DISCLAIMER: The Views, Comments, Opinions, Contributions and Statements made by Readers and Contributors on this platform do not necessarily represent the views or policy of Multimedia Group Limited.
Tags:
Coronavirus in Africa
Domestic Violence
Nigeria