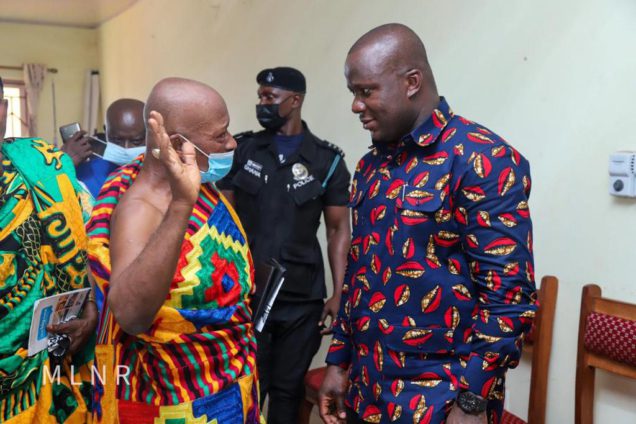 The Minister for Lands and Natural Resources, Samuel A. Jinapor has charged the Ahafo Region Forestry Commission not to auction any confiscated wood with immediate effect.

The Minister said until he issues a different directive, officers of the Commission are to ensure that woods seized are kept in storehouses, the forest, or wherever is appropriate.

He said this during a meeting with the Ahafo Regional House of Chiefs on Thursday, November 18, 2021.

Addressing the chiefs on ways to put an end to lumbering in the region, the Minister suggested that some kind of “Operation Halt” be enforced in the region for a period.

He said he is saddened by the rate at which the land of the Ahafo Region has been degraded by the activities of lumbering and galamsey and therefore appealed to the chiefs to help him salvage those available.

He added “it is true that we are yet to start with the reclamation programme, but I would plead with you to help salvage what we have as we wait to cover and gain back the lands used for mining in the past”

Mr. Jinapor also commented on reports he has received about a cartel terrorizing the indigenes and officials of the Forestry Commission and asked that the House works together with the REGSEC to clamp down on their activities.

He said, “I have received a number of reports about these cartels, I hear some go by the name Salifu 11 and another Malik 9 who are going around causing harm to our officials, this is not a good thing, and I would plead with you to work together with the REGSEC to bring the situation under grips.”

The Lands Minister again craved the indulgence of the chiefs to assume their rightful positions and capacity as heads of the traditional areas and ensure that charcoal burning is halted.

This charge of the Minister comes after some concerns expressed about the Commission in the region by the President of the Ahafo Regional House of Chiefs, Nana Ansah Adu Baah II.

The President, who is also the Yamfohene expressed displeasure about how the officers handle woods confiscated, saying that the perpetrators are not penalised as they should and the wood sold out to strangers instead of being used for developmental projects in the region.

Tabling other concerns to the Minister, the President of the house asked that the Minister request mining companies in their community to build factories in the region to ensure that the youth have an alternative job to mining and also embark on developmental projects which will add onto the facelift of their communities.

Some other chiefs at the gathering suggested that the soldiers or forestry guards be made to stay within the forest in order to deter the loggers from venturing into the forests.

Another asked that there should be proper coordination between government and the House of Chiefs to keep them abreast of happenings so they can contribute meaningfully to end lumbering and galamsey in the area.

Having made their concerns known, the traditional ruler assured the Minister of their readiness and continued commitment towards the protection of the Lands, Forestry and Natural Resources of the country, particularly the forest reserves and water bodies which he said are of prime concern to them.

He further called on his sub-chiefs to go by the directives given by the Minister for the benefit of the Ahafo community and for Ghana as a whole.