Euros on MGL: Meet the Italian fan whose prediction has twitter talking 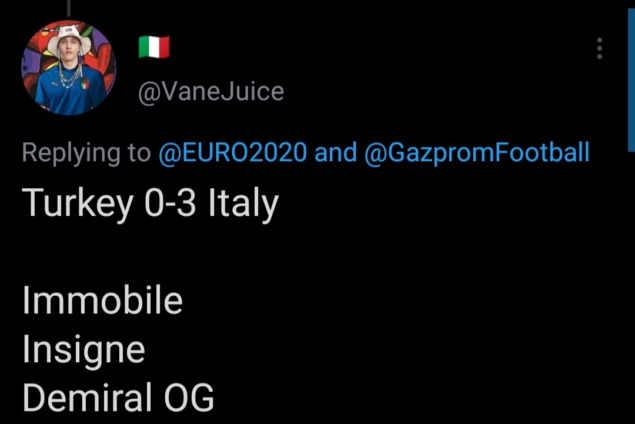 A twitter user who correctly predicted Italy’s 3-0 victory over Turkey in the opening game of Euro 2020 has got social media wondering how he did it.

The Italian with the twitter handle @VaneJuice did not only predict the scoreline correctly but also named the goal scorers including the own goal by Turkish defender Merih Demiral.

@VaneJuice’s tweet which has garnered over 19K and 90K Likes was in response to the Uefa Euro 2020 official handle’s tweet soliciting predictions for the tournament’s opening game.

The tweet which has since been shared by several online portals including ESPN’s official Facebook page has got people scratching their heads due to the level of accuracy.

One user alleged that the tweet had been edited after the game but another reminded him that tweets couldn’t be edited. Other comments asked @VaneJuice to predict if their club would win the champions League or if Lionel Messi would sign for their club.

It is rare for people to predict goal scorers with such accuracy, more so an own goal but what is clear is that @VaneJuice has become popular and all eyes will be on his predictions as the Euro 2020 tournament continues.