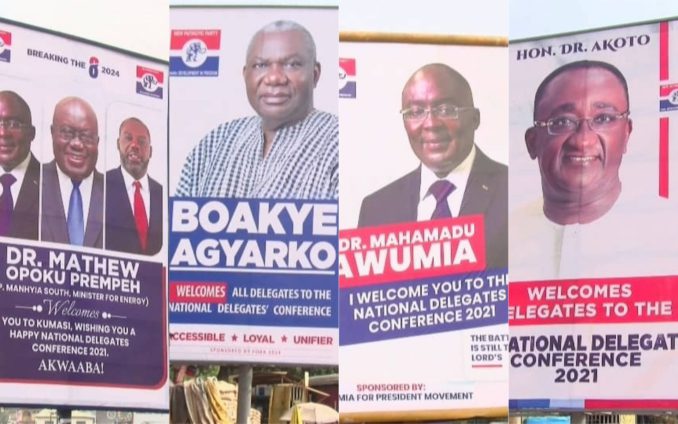 Individuals belived to be aspiring for various positions in the New Patriotic Party (NPP) continue to flout the party’s directive to refrain from mounting billboards ahead of the Annual Delegate’s conference in Kumasi on Saturday.

Various intersections and entry points to the city have huge billboards with pictures of key party personalities welcoming delegates to the event.

Though the directive prescribes possible disqualification of aspirants from contesting the primaries as punishment for flouting it, many don’t seem to care.

Sections of the Kumasi-Accra and the Kumasi-Sunyani roads are awash with billboards of some of the aspirants.

The red, blue, and white colours of the New Patriotic Party are visible on the principal streets of Kumasi.

The advertisements give every indication that the Annual National Delegate’s Conference of the party being held in the city, is imminent.

Dominant among them is the one belonging to the Minister of Food and Agriculture, Dr. Owusu Afriyie Akoto, who is said to be interested in the flagbearer position of the NPP.

Similar billboards, banners, and T-shirts were showcased at the Ashanti Regional Delegate’s Conference of the NPP in October.

Former Energy Minister, Boakye Kyeremanteng Agyarko, who is said to be harbouring Presidential ambitions has his billboards mounted as well.

Conspicuously missing among the billboards are those of Trades and Industry Minister, Alan Kyeremanten, who has long shown interest in the flagbearer position.

Afia Korankyewaa, a leader of Queens, a group associated with Alan Kyerematen in an interview explained that the group refrained from mounting billboards due the directive.

“We wanted to mount billboards too but we had to hold on after the communication from the party. But everyone is doing it and it seems we are the only people adhering to the directive. It is very unfair”, she said.

Miss Korankyewaa therefore wants the party to enforce the directive to maintain order.

The directive signed by the Director of Communications, Yaw Buaben-Asamoa banned all billboards and signboards, banners, or any kind of outdoor signage with images and names of members with or without the consent of the individuals involved within Greater Kumasi before and during the period of the conference.

It also directed the removal of all such boards already mounted.

However, Luv News checks reveal many of the campaign materials were erected after the directive was issued.