NSMQ 2021: We are not intimidated by Presec and Prempeh College – Keta SHTS contestants 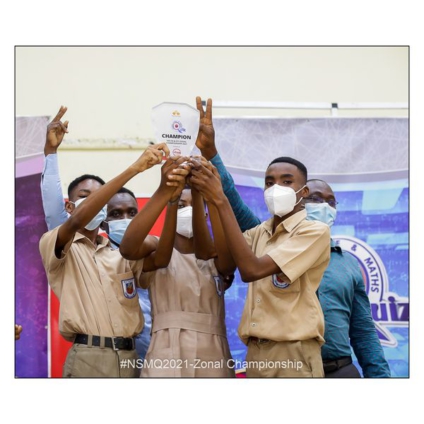 Contestants from the Keta Senior High Technical School (Keta SHTS) who are eagerly waiting for the grand finale of this year’s edition of the National Science and Maths Quiz have declared that they are not intimidated by the two former champions.

The Dzolalians said even though it is their first time reaching the finale, they are not at all scared to slug it out with the defending champions, Presbyterian Secondary School (PRESEC), and the four-time winners, Prempeh College.

“Not at all. Not even a little bit,” the students told JoyNews journalist, Manuel Koranteng on the AM Show, in an interview.

On Tuesday, November 23, Keta SHTS beat Wesley Girls’ SHS and Tamale SHS to register its presence in the final stage of the contest.

Sharing their excitement, the students said “It means a lot. Being the first set of students to make it to the finals of the NSMQ is a great achievement. Winning the trophy for the very first time would do it for us.”

Meanwhile, Keta SHTS Alumni have said that they are hopeful of winning this year’s NSMQ championship to push for the construction of a sea defence wall close to the school.

The old students believe that the immediate construction of the wall will save the institution from being washed away by the sea.

Speaking to JoyNews at the sidelines of the ongoing national competition on Thursday, Francis Kattah said the existence of the school, which is one of the best in the Volta Region, is threatened by the sea.

“It [the sea] poses an existential threat to us because if the sea continues to eat our land, [and] nothing is done about it, very soon our existence will be no more because it will ravage our school from existence.”

“The school was far from the sea but now we are few kilometers from the sea; so, we are pleading with those in authority to salvage the situation by giving the construction of the sea defence project the needed priority,” he told JoyNews’ Nana Yaw Gyimah.