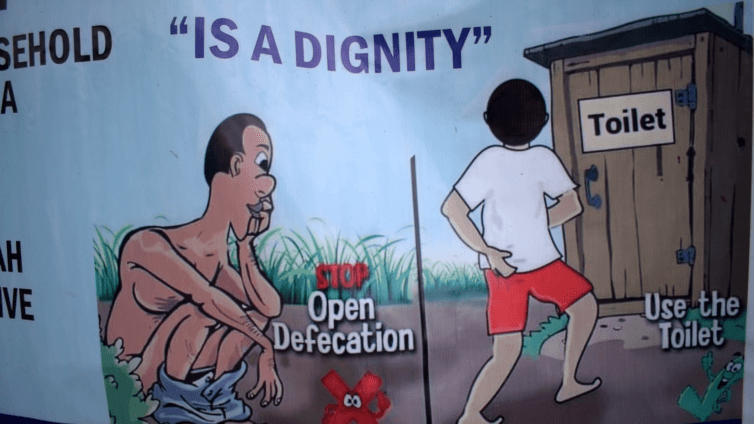 Some households in the Obuasi Municipality of Ashanti Region are converting their toilet facilities into bedrooms for rent.

This has gotten the Municipal Assembly to activate a bye-law which stipulates a fine of ¢1,200 or six-month jail term for people caught engaged in this illegal act.

The Obuasi municipal chief executive, Elijah Adansi-Bonah is worried the action of the people is not helping in fighting the sanitation problem.

About 14,000 people in the Obuasi municipality are caught engaging in open dedication.

In commemoration of world toilet day, the municipality organized a durbar to create awareness and also to address the sanitation crisis in the Obuasi municipality.

Speaking at the event, Mr. Adansi-Bonah expressed optimism the Obuasi area will be free from Open defecation.

‘’We decided to come to the central market, interact with our people, educate them so that those who do not have toilet in their houses will do it. We have begun construction of a concrete drain and people have started easing themselves in the drain and that is very bad so we are going to set up a task force to monitor those areas’’.

We are working together with the environmental health office unit so that those who will be caught will be punished to serve as a deterrent to others’’.

‘’For those who do not have toilet in their houses, we are going to sit together with engineers to create toilet space within their houses and with this I know Obuasi will be free from open defecation in some few years to come’’. He said.

The theme for this year’s celebration is ‘’stop open defecation, own a household latrine now, let’s play our part in this covid-19 era’’.

The municipal environmental officer, Mrs. Moro Fuseina, said the percentage of people owning a latrine in the municipality will increase next year.

“A compound house with 10 rooms should have more than one toilet. From January, anyone who defies the law will be sent to court.

If we live to see next year, I can assure you that the number of people who do not have household toilet will decrease. I will send at least over 3,000 people to court because they don’t have toilet in their houses next year”. She emphasized.

So far, about 25 people who do not have toilets in their houses have been dragged to court.

DISCLAIMER: The Views, Comments, Opinions, Contributions and Statements made by Readers and Contributors on this platform do not necessarily represent the views or policy of Multimedia Group Limited.
Tags:
Elijah Adansi-Bonah
Rent
Sanitation
Toilet