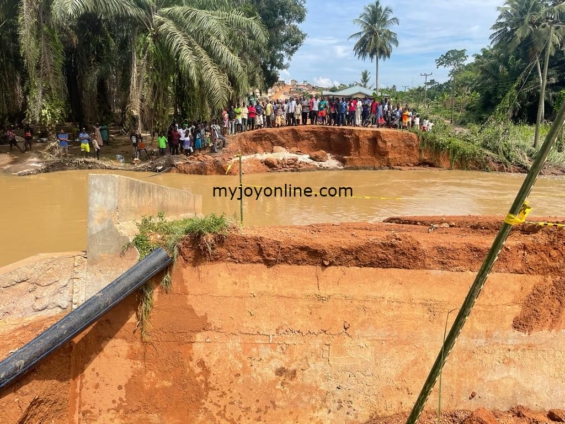 One person has been confirmed dead and scores of people trapped in their homes at Amamoma in the Central Region.

Nearly a thousand people who were also affected by Saturday’s downpour in the Komenda Edina Eguafo Abirem Municipality are seeking shelter in churches, mosques and school blocks.

More than 100 houses and some major bridges linking several towns and communities have collapsed following the overflow of some rivers in the region.

JoyNews’ Central Regional Correspondent, Richard Kwadwo Nyarko, reported that the road from the Elmina Junction to the Ankaful Prisons is impassable, with the houses nearly submerged.

Director-General of the National Disaster Management Organisation, Nana Agyeman Prempeh, has asked residents to move to higher grounds to ensure their safety.

“As I said, we are here with some relief items for them. Currently, they are in safe haven – they are in churches, classroom blocks and mosques. Some of them have gone to live with their relatives and friends in other areas.

“We are going to make the presentation of the relief items to the affected individuals,” he said.

The Member of Parliament (MP) for Twifo Hemang, Bright Wereko Brobby, has said the Roads and Highways Ministry has assured of fixing the roads that have been washed away by the floods immediately.

“We heard the news early yesterday [Saturday] morning and since that time, we have done all we can, including getting in touch with everybody who matters, particularly the Roads Minister who, according to him, immediately dispatched his rapid response team and directed a very resourced contractor working on the Twifo Praso-Dunkwa stretch to come in.

“Fortunately for us, the bridge itself was not affected and the engineers have confirmed that it is the road itself that has been washed away…I am pretty sure by close of day, they can open this [road] to traffic. I will appeal to residents to be calm. Some of these things happen to us in life,” he said.