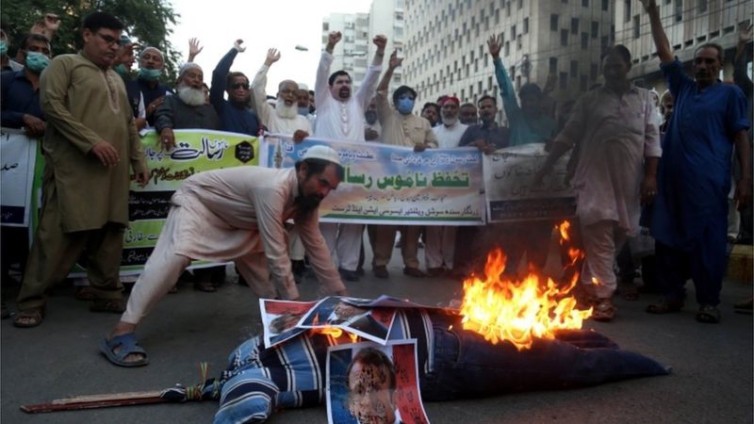 Protesters have burnt effigies of the French president

An Islamist group in Pakistan has called off its anti-France protests, saying the Pakistani government has endorsed a boycott of French goods.

The demonstrations had been in response to France defending the right to show cartoons of the Prophet Muhammad.

President Macron has strongly defended French secularism in the wake of the beheading of a teacher who showed such cartoons during a class discussion.

This prompted anger in parts of the Muslim world.

Members of the hard-line Tehreek-e-Labaik Pakistan (TLP) group brandished copies of an agreement bearing the signatures of at least two ministers. The Pakistani government has not officially commented on the agreement or confirmed how any boycott would work.

Depictions of the Prophet Muhammad are widely regarded as taboo in Islam, and are considered highly offensive by many Muslims.

Pakistan’s Prime Minister Imran Khan had been among political leaders who criticised Mr Macron for comments about Islamism in France. But groups like the TLP had demanded further action.

Supporters had blocked a key road leading into the capital Islamabad since Sunday, causing widespread disruption. But the sit-in has now been called off after TLP leaders said the government had agreed to their demands.

“We are calling off our protests after the government signed an agreement that it will officially endorse boycotting French products,” Ejaz Ashrafi, a spokesman for the group, told the Reuters news agency.

The agreement shown to the media carries the signatures of the minister for religious affairs and the interior minister. It says the government will also let parliament decide if the French ambassador should be expelled. The Pakistani government has not commented on the supposed deal.

The TLP has previously gathered huge crowds to protest over blasphemy issues. Under Pakistani law those found guilty of insulting the Prophet Muhammad can face the death penalty.

In France, state secularism (laïcité) is central to the country’s national identity. Freedom of expression in schools and other public spaces is part of that, and curbing it to protect the feelings of a particular religion is seen as undermining national unity.

The satirical magazine Charlie Hebdo, targeted in a deadly jihadist attack in Paris in 2015 over cartoons of the Prophet Muhammad, also mocks other religions, including Catholicism and Judaism.

France’s foreign ministry had earlier called appeals for boycotts of French goods in several Muslim-majority countries “baseless”, adding that they should “stop immediately”.

Paying tribute to the beheaded teacher last month, Mr Macron said France “will not give up our cartoons”.

Two weeks before the attack, Mr Macron described Islam as a religion “in crisis” and announced new measures to tackle what he called “Islamist separatism” in France.