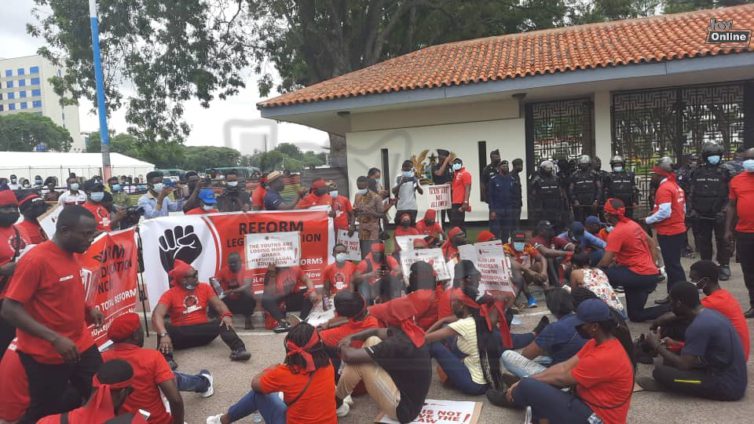 National Association of Law Students hit the streets of Accra to demonstrate over the Ghana School of Law entrance exams failures.

Private Legal Practitioner Baffour Awuah has opined that Parliament’s directive to the General Legal Council (GLC) to admit the 499 candidates who were denied admission to the Ghana School of Law is not grounded in law.

According to him, there is no law that compels the GLC to comply with the directives of the House. Neither does the House have the power to direct the Council.

Speaking on Top Story, Mr Awauh said, “it is like Parliament saying they have passed a directive to compel the President to act in one way or the other. I don’t think that it is grounded in law.”

He stated that “I am yet to come across a law that obliges the GLC to comply with the directive of Parliament in the manner which they have done today.”

The Legal practitioner stated that one ought to be cautious in terms of the approach they use in addressing the issues of the Law School.

“What we need as a people is to now confirm the problem they have and make sure there is reform, but there ought to be transparency in terms of the system (at the Law School),” Mr Awuah said.

This comes after the First Deputy Speaker of Parliament, Joseph Osei Owusu directed the General Legal Council to admit the 499 candidates who were denied admission to the Ghana School of Law.

This was after the House resoundingly voted in support of a motion filed by Deputy Majority Leader, Alexander Afenyo-Markin, which prayed the House to compel the GLC to admit all candidates who passed the entrance examination per the advertised rules.

The Effutu MP had described the actions of the GLC, post the entrance examination, as unacceptable.

According to Afenyo-Markin, should it be left unaddressed, it would make the law course unattractive to prospective applicants.

Meanwhile, Mr Awuah stated that although he sympathises with the aggrieved candidates, he believes that there should be a thorough investigation.

“(We need to) particularly ask ourselves whether or not at the time when the exam was being written, the standard the law school is holding on to was one that was in force and was known to people.”