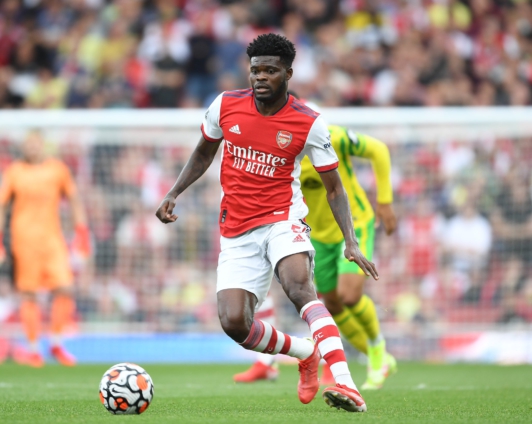 The Gunners have endured a slow start to the new season with Arteta feeling the pressure.

Due to persistent injuries, Partey since his signing for Arsenal has been in-and-out of the team, unable to leave a real mark.

Nonetheless, Arteta believes the football history of the Ghanaian is a requirement to shape and mould the future of Arsenal.

“He has that winning culture, because he has won a lot in the game already, and to have these kind of players in the team is extremely important. So he has got a huge role to play in the team,” Arteta said in an interview.

Pundits and fans alike have tagged the current Arsenal setup as spineless – lacking leadership, and with the team looking more and more fresh-faced with younger players than there is experience, there lies proof in the claim.

However, Arteta is confident in the leadership qualities of Partey.

“He is a player that has to be one of the leaders, he has to be the boss in midfield and one of the senior players that has to carry responsibility out of the young players and lead. We have been missing that big time’ the Arsenal head coach said to Goal.

Partey recently recovered from an injury he sustained in a preseason friendly versus Chelsea, and made his first appearance this season for the Gunners against Norwich City.

The midfielder played in the last 20 minutes as he helped Arsenal secure their first points of the Premier League season with victory over Norwich at Emirates Stadium.

Arteta was under mounting scrutiny after a miserable start to the campaign with three defeats that left the Gunners at the foot of the table, so a win that was workmanlike rather than spectacular will be gratefully received.

Pierre-Emerick Aubameyang was back on target to set Arsenal on their way after 66 minutes, with a finish from almost on the goal-line after Canaries’ keeper Tim Krul turned Nicolas Pepe’s shot on to the post and the same player then struck the woodwork again.

Arsenal had an anxious moment as referee Michael Oliver conducted a VAR check for offside before the Emirates Stadium celebrate with a mixture of elation and relief.