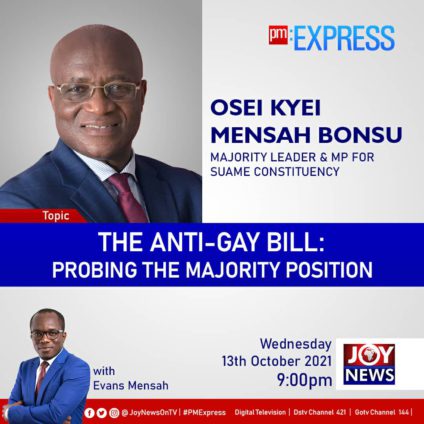 Tonight on JoyNews, PM Express further discussed the bill seeking to bar same-sex related activities and criminalise the LGBTQI community in the country.

Chairman of the Committee, Kwame Anyimadu Antwi has indicated that members will not bow to pressure to pass the anti-gay bill.

As Parliament is yet to deliberate on the issue, several religious bodies have called on the House to expedite processes to pass the bill into law.

Meanwhile, Majority Leader, Osei Kyei-Mensah-Bonsu has suggested that the Executive, through the Attorney General, Godfred Dame could sponsor the anti-LGBT bill, instead of the current approach of its being laid before Parliament by private members.

Host, Evans Mensah in a one-on-one interview with the Majority Leader asked the Majority’s position on the Promotion of Proper Human Sexual Rights and Ghanaian Family Values Bill, popularly known as the anti-LGBTQ Bill.