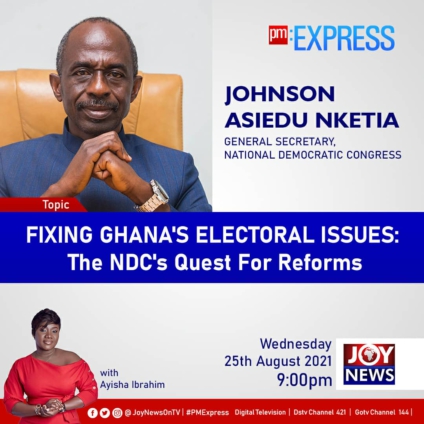 The National Democratic Congress (NDC) presented its electoral reforms to the Electoral Commission (EC) suggesting among others, that the appointment of EC Chairpersons should be done with prior approval of Parliament.

Also, the opposition party in its proposal wants the voting period of 7am to 5pm on Election Day to be maintained.

But the Jean Mensah-led Electoral Commission has directed the party to table its proposed electoral reforms before the Interparty Advisory Committee (IPAC) for dialogue.

According to the NDC, it did not submit its proposals for electoral reforms to the Inter-Party Advisory Committee (IPAC) because the Committee is problematic.

Tonight on PM Express, host, Aisha Ibrahim interacted with the party’s General Secretary, Jonhson Asiedu Nketia to discuss the NDC’s next steps in its quest for electoral reforms.