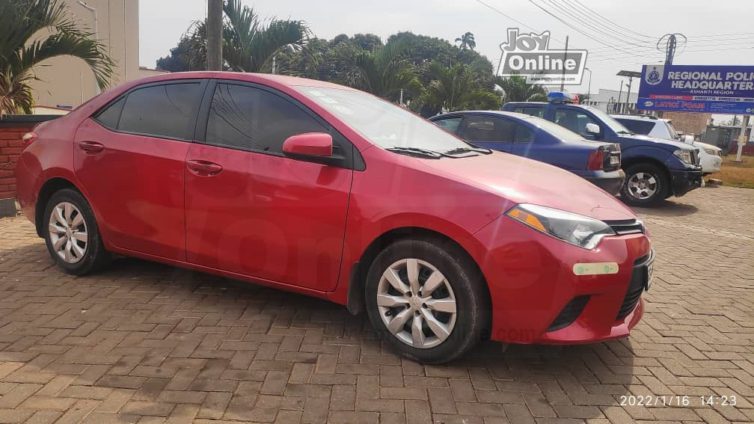 Police have mounted a search for two gunmen who, at gunpoint, snatched a red Toyota Corolla from its owner with a baby trapped inside.

The incident happened at Santasi, a suburb of Kumasi in the Ashanti Region.

The vehicle was retrieved after the alleged snatchers abandoned it at Dakodwom, following a chase by the police patrol team on Sunday, January 16, 2022.

“The Police upon receipt of the information swiftly sent out all patrol vehicles and motorbikes within the metropolis in search of the said vehicle and its occupants (suspects).

“Sensing danger on the approach of a police vehicle and a taxi cab, the suspects abandoned the vehicle around Dakwadwom and fled into a nearby bush,” Ashanti Regional Police PRO, ASP Godwin Ahianyo explained in a statement.

Police found the baby safe and has since reunited the child with the mother.

The statement added that “the vehicle has since been driven to the Regional Police Headquarters and the child
reunited with the mother.”

Though police patrol vehicles are pursuing the suspects and operational units have been activated to assist in the search of the suspects, it is calling on the general public to provide credible information to help apprehend suspects.

They further assured the public of their resolve to ensure the Ashanti Region is safe.