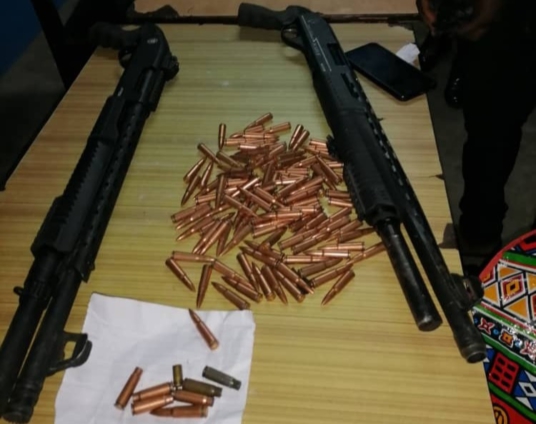 The Accra Regional Command has intercepted two pump action guns and 100 rounds of AK 47 ammunitions in a dawn robbery operation on a bank at Lashibi.

According to the police, on Friday dawn at about 2 am, some unidentified armed men numbering about six attacked and robbed a bank at Lashibi.

In the process, the robbers fired into the vault lock, chiseled the wall to the vault to gain entrance, and stole from the safe.

However, gunshots from the scene attracted a police patrol team who moved in that direction.

The robbers realising the police approaching managed to escape amidst firing.

A search at the scene led to the retrieval of an electric cutter, chisel, harmer, 11 live 9mm ammunition, and a round of spent ammunition.

An extension of police search within the enclave led to the arrest of two suspects.

Prince Ankrah and Albert Buckson who were found in a parked taxi cab with the engine on few meters from the scene are suspected to be on surveillance linked to the robbery.

Reinforcement patrol teams to the robbery scene also intercepted an urvan bus suspected to be linked to the same robbery but its occupants on seeing the police escaped.

It was in the urvan bus that the police retrieved the 2 pump action guns and about 100 rounds of live AK47 ammunitions.

Currently, the two suspects and the three private security details who were on duty at the time of the incident are all being detained to assist in police investigations.