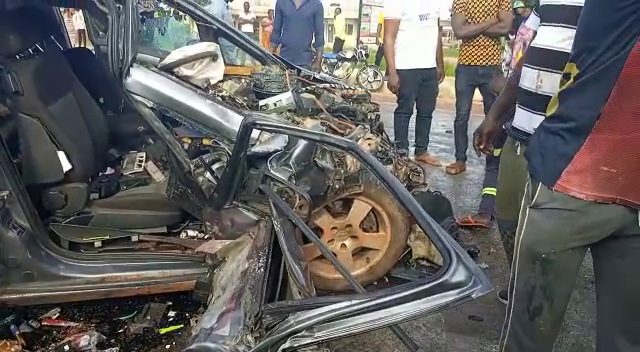 A pregnant woman has sustained fractures in both legs and six other persons have sustained various degrees of injury in an accident at Zebilla in the Bawku West District of Upper East Region.

The accident is said to have occurred late afternoon, Sunday.

Two vehicles were involved in a head-on collision opposite the Bawku West District Assembly on the Bolgatanga – Bawku Road.

All the injured passengers were onboard the Opel Zafira. They were immediately conveyed to the Zebilla Hospital for treatment.

The pregnant woman was however transferred to the Bawku hospital for orthopaedic surgery on Monday.

The occupants of the Hundai truck were the driver and his mate, who allegedly bolted from the scene of the accident for fear of being lynched.

Zebilla Police have confirmed that the owner of the Hyundai truck, has reported to the Police station as efforts are being made to locate the fugitive driver and his mate. Meanwhile, further investigations continue to unravel the cause of the accident.

Eyewitnesses at the scene however, have blamed the recent spate of accidents on that stretch of the the newly constructed Bolgatanga – Bawku road, on the absence of speed ramps.