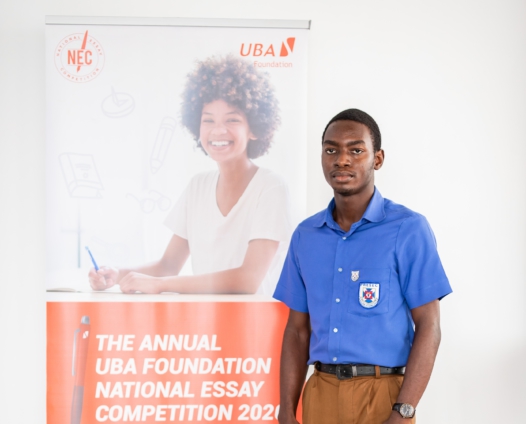 This is the third time students from the school have won the competition.

Four students from Presec Legon were part of the 10 finalists of the seventh edition of the Competition.

Richmond Ayiku Lartey, a final year student of Labone Secondary School who was the second runner-up walked away with $2,000.

The awards will allow them attend any university of their choice in Africa.

Each of the 10 finalists received a UBA branded Laptop and Certificate of Participation as a recognition for the bold step taken to participate in the competition and making it to the final stage.

The 7th edition of the National Essay Competition recorded over two hundred applications from schools across the Country.

Speaking at the virtual announcement ceremony on Monday, Olalekan Balogun, the Managing Director & CEO of UBA Ghana congratulated all 10 finalists.

He also encouraged them to utilise the platform given to them to excel in their academic pursuits.

“At UBA we prioritise education, as it is a core aspect of our Corporate Social Investment and we are very committed to the area of education of the African in a bid to further transform the continent” Mr Olalekan said.

He also congratulated all finalists of the competition especially the top three and advised them to focus on their education and also read wide for extended knowledge to realise their academic aspirations.

He called on the Heads of other second cycle institutions in the country to ensure their students participate in the eight edition that will be launched soon.

“In addition to the significant quantum of funds they have devoted every year to pay for the scholarships for the winning students and ensuring that every winner of the competition attains the highest education possible in Ghana and on the continent of Africa, the NEC has generated quite a healthy interest among students to compete in and win,” she said.

She further noted, “I want to emphasise that the future competitiveness of Ghana would depend on the quality, type and numbers of educated and skilled workers available in the country”.

“To all the students who participated in and especially to the winners of the 7th Edition of the NEC, remember that you are the future leaders of this country thus the future which will be characterised by high-quality skills in all areas belong to you,” she concluded.

The announcement of this year’s awardees means that, the Bank will now sponsor 18 students to attend any University of their choice across Africa.

The National Essay Competition, a Corporate Social Responsibility initiative of UBA Foundation after its launch in Ghana in 2014, has provided a competitive platform to develop the intellectual and writing abilities of SHS students in Ghana as well as granting winners fully paid scholarship into any University in Africa.