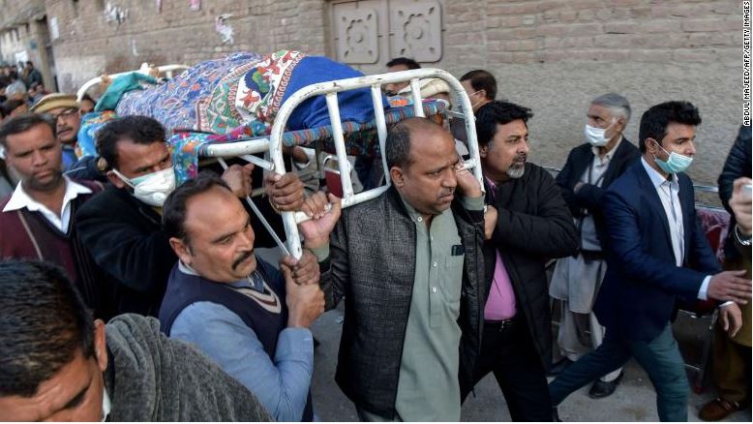 Christian devotees carry the coffin of a priest who was gunned down when driving back home after Sunday prayers in Peshawar on January 30, 2022.

Gunmen killed a Christian priest and wounded another as the clerics drove home from church in Pakistan’s northwestern city of Peshawar on Sunday, police said.

No one immediately claimed responsibility for the shooting in a city where scores of people died in a twin suicide bombing outside a church in 2013 — one of the deadliest attacks on Pakistan’s Christian minority.

Azad Marshall, the most senior bishop in the Church of Pakistan, condemned the attack and tweeted: “We demand justice and protection of Christians from the Government of Pakistan.”

Pakistan’s northwestern areas bordering Afghanistan have seen a rise in militant attacks on security forces in recent days, many of them claimed by Tehreek-e-Taliban Pakistan (TTP), a group which associates itself with the Afghan Taliban.

TV footage showed emergency services removing Siraj from the car, and people chanting “Long live Jesus Christ” as they carried his body on a bed through the streets to a house. Mourners hugged each other and sobbed.

Pastor Siraj’s colleague — named by Bishop Azad as the Reverend Patrick Naeem — was out of danger and being treated for his injuries, a spokesman for the city’s Lady Reading hospital said.

Bishop Azad said both were clergy of the Diocese of Peshawar in the Church of Pakistan, which is a union of protestant churches including the Methodists and the Anglicans.

DISCLAIMER: The Views, Comments, Opinions, Contributions and Statements made by Readers and Contributors on this platform do not necessarily represent the views or policy of Multimedia Group Limited.
Tags:
Gunmen
Pakistan attack
Priest