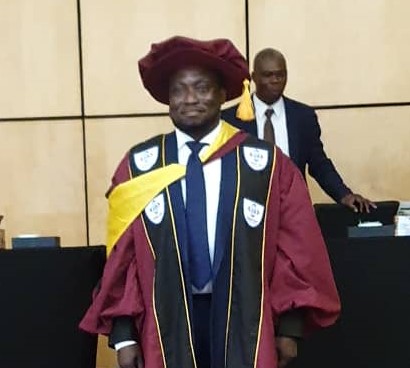 The President of African Investment Group, Dr. Sam Ankrah is making a strong case for government to consider privatizing some of the  Covid-19 vaccine purchases and importation deals so as to address current challenges facing the country.

According to Dr. Ankrah, government must allow private firms and multinationals to import vaccines for their workers and later put their reserves into a “national pool”.

The Economist and International Investment banker was speaking to JoyBusiness after he was inducted as a fellow of the Ghana Institute of Chartered Economists in Accra.

“Let’s allow the blue-chip companies and the multinationals, to use their foreign contacts and influence to import vaccines to vaccinate their workers.

“They could also procure extra to give to others and the communities they are sited as part of their CSR activities” he explained.

The economist argued that all these private imports could be approved by the Food and Drugs Authority and the Ghana Health Service before they are administered to the masses.

“I trust that the financial burden on government to import large doses will be reduced and the savings used for other beneficial projects for the masses,” Dr. Ankrah added.

Dr. Sam Ankrah was of the view that “the earlier we sought the services of experts’ economist and strategic thinkers to aid us come out of these not normal times, the better for us as a country”.

In his presentation, Dr. Ankrah noted that even though he sees nothing wrong with borrowing, measures must be put in place to ensure that monies borrowed are channelled into productive sector of the economy, adding that it must go “where the people will feel it and not complain or yell when the figures are mentioned.”

“In the area of our fiscal debt, I find the levels not only frightening but also wonder where all that money has gone to” Dr Ankrah said.

He added that “it is not the best to tout progress when producers of fertilizers for food production are owed huge sums of money, to the point that some are on the verge of collapsing.”

The economist and investment banker noted that more investments in infrastructure projects will be able to create employment, serve societal good and provide the necessary revenue to settle loans.

Responding to recent concerns by a cross-section of the public that they are not feeling the impact of a recovering economy, Dr. Ankrah maintained that “a successful economy is where we see action at the micro side. Where we see jobs being created, entrepreneurs and start-ups being made and the real sectors performing to their optimum to bring down the cost of living and cost of doing business.”

The Institute of Chartered Economists

The program also saw some other persons that have completed the various courses awarded as chartered economists.

The Institute of Chartered Economists – Ghana (ICEG) has been practising as a professional body registered under the Professional Bodies Registration Decree, 1973, (NRCD 143) with the mission to promote and encourage the study of the art and science of Economics in Ghana.

DISCLAIMER: The Views, Comments, Opinions, Contributions and Statements made by Readers and Contributors on this platform do not necessarily represent the views or policy of Multimedia Group Limited.
Tags:
African Investment Group
Covid-19
Dr Sam Ankrah