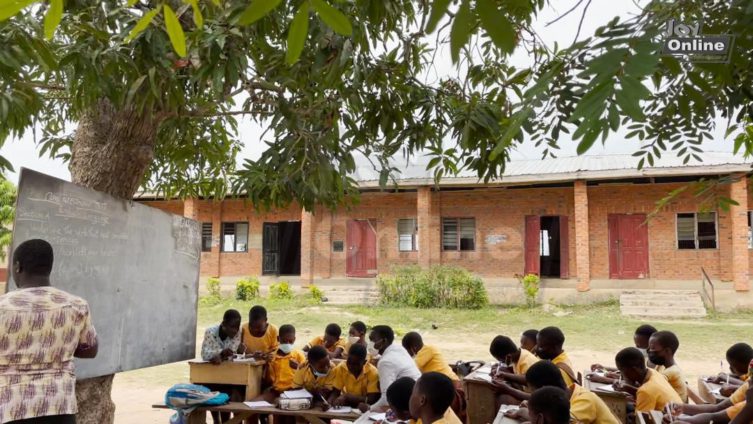 Nearly 400 school pupils of the Esaaman United Basic School in the Komenda Edina Eguafo Abirem Municipality have been forced to study under trees and in open spaces.

The building they have been studying in developed serious cracks and was declared unsafe for academic activities about six months ago.

Since then, academic activities have to be suspended whenever it threatens to rain.

The students now battle with the ants on the trees, distractions from their environment as well as the sizzling sun owing to their dilapidated classrooms which pose a grave risk to their life and that of their teachers as the building could collapse at any time.

Though no student has been injured yet, chances of a major mishap cannot be ruled out if they continue to use the structure.

One of the students, John Yawson narrated, “We were in the classroom one day and suddenly, we heard a sound from the building. We started running away.

Before that, the cracks in the walls were very conspicuous.  Following that, we had to carry our tables and chairs outside. And When it rains, we are unable to study.”

She recounts: “Our building was collapsing and that’s why we have come here.  When it’s raining, we have to pack all the chairs inside and when the sun is too hot, we need to do same and halt everything we are doing.”

The students and teachers, on a daily basis, compete with sounds of academic activities from adjoining classes held in the same open space.

It is not only the vagaries of the weather the school pupils are exposed to, but inadequate tables and chairs for academic work. Dual desks that are supposed to be used by two pupils are being shared by three and in most cases 4 pupils.

The students have to write in turns and this is affecting their handwriting and the pace with which they write.

The teachers are unable to speak with me on this situation except to say that countless letters have been written to the Municipal Education Office and the Komenda Edina Eguafo Abirem (KEEA) Assembly but nothing has been done.

Chairman of the School Management Committee (SMC), John Kingsford Arthur says the decision of the school to get the children out is to avert a possible disaster.

“We couldn’t help but get them out here until the integrity of the building is addressed. We can’t allow the children in there because we fear of a possible calamity,” he said.

PTA chairman for the Esaaaman United Basic School, Albert Senkyire told JoyNews effort that has been made to get the problem fixed, including getting the Assemblies to come to their aid.

“The PTA has started something and we want the support of the Assembly but we have not been getting favourable response,” he stated.