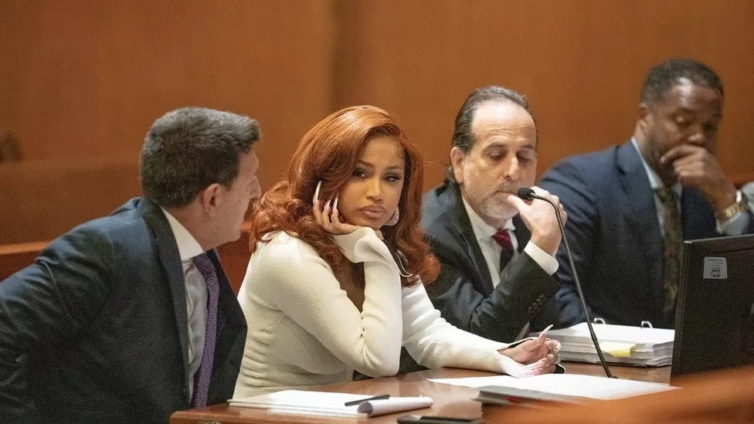 Cardi B has admitted two offences arising from a brawl in a strip club, as part of a deal that means she will avoid a trial and possible jail time.

The Grammy-winning rapper, born Belcalis Almanzar, pleaded guilty to third-degree assault and second-degree reckless endangerment and was sentenced to 15 days of community service.

Ten other charges were dismissed.

“I’ve made some bad decisions in my past that I am not afraid to face and own up to,” she said in a statement.

In court, the 29-year-old admitted organising and participating in two attacks on employees of the Angels nightclub in New York in 2018.

According to authorities, the incidents grew out of a feud between Almanzar and two sisters – one of whom she believed was having an affair with her husband, the rapper Offset.

Prosecutors said that, on the first night, Almanzar and her entourage struck the victim, a bartender, pulling her hair, punching her and slamming her head into the bar.

Asked to confirm the details in court, Almanzar did so quietly, admitting she had offered a friend $5,000 (£4,000) over Instagram to assist her in the confrontation.

As well as community service, the rapper has been ordered to stay away from the victims, identified as Jade and Baddie Gi, for three years.

She accepted the plea deal one day before the case was due to come to trial, the New York Times reported.

The musician’s lawyer, Drew Findling, said she wanted to draw a line under the case.

“There are too many things that she has planned for her family, for her career and for the community and she just felt, quite honestly, that a three-week jury trial was going to be a distraction from the things that she felt was most important and so, hence, we made contact with the prosecution,” he told the New York Post.

In her statement, the rapper said: “Part of growing up and maturing is being accountable for your actions. As a mother, it’s a practice that I am trying to instil in my children, but the example starts with me.

“These moments don’t define me and they are not reflective of who I am now.”

Melinda Katz, the Queens district attorney, said in a statement: “No-one is above the law. In pleading guilty today, Ms Belcalis Almanzar and two co-defendants have accepted responsibility for their actions.”

Cardi B rose to fame with the track Bodak Yellow in 2017, topping the Billboard chart and becoming one of rap’s most colourful and outspoken performers.

Her debut album, Invasion of Privacy, won the Grammy for best reap album in 2019, and she has scored global number one hits with the Latin-flavoured I Like It and the X-rated WAP, a duet with Megan Thee Stallion.

After Thursday’s hearing at Queens County Criminal Court in New York, she was mobbed by dozens of fans and court employees.

“In all my years of covering court cases, I’ve never seen this,” said NBC news reporter Melissa Colorado on Twitter. “Court staff cheering for a defendant who accepted a plea deal as she walks out of the court room.”

One employee even asked the rapper for a photo, Colorado added.