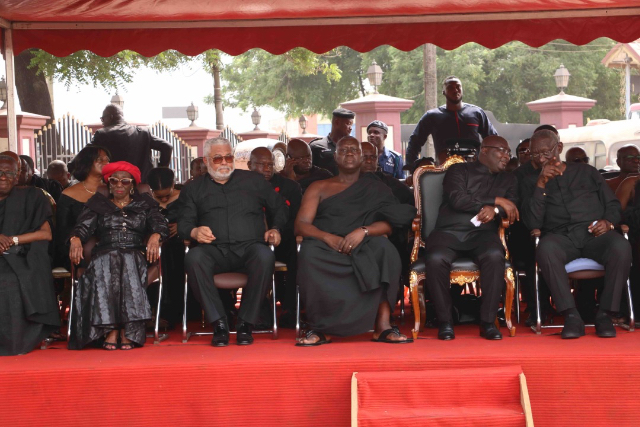 A grand durbar hosted by Otumfuo Osei Tutu II, who sat in state with several leading Ashanti chiefs was also attended by Vice-President Mahamadu Bawumia, former Presidents John Agyekum Kufuor and John Dramani Mahama as well as several Ministers of State, the Chief Justice, corporate leaders and people from all walks of life.

The former President and his wife personally commiserated with Otumfuo Osei Tutu as he sat in state and took time to also commiserate with chiefs and queenmothers present at the durbar.

Nana Akwasi Agyeman, who spent most of his political office during the tenure of former President Rawlings was popularly known for his no-nonsense approach as the longest serving Mayor of Kumasi. He was later appointed Deputy Minister of Environment in charge of the Northern Sector.

In a tribute to Nana Akwasi Agyeman, popularly referred to as Okumkom, the former President described him as ‘a man who was available at the right time and at the right place.

He said the late former Minister’s vibrancy helped to ensure command and control.

Mr Rawlings said Nana Akwasi Agyeman approached the role with the zeal of a military commander at the war front.

“Discipline was key in achieving his objectives and he was not one to stay in the office and bellow out orders.

“He bellowed out orders all right, but out in the open, directly supervising and exhibiting an enviable hands-on approach. He enjoyed working and the tempo of the revolution sat well with his temperament.’

Nana Akwasi Agyeman who died at the age of 86, was laid to rest on Monday night after a burial service at the St. Cyprians Anglican Church in Kumasi.