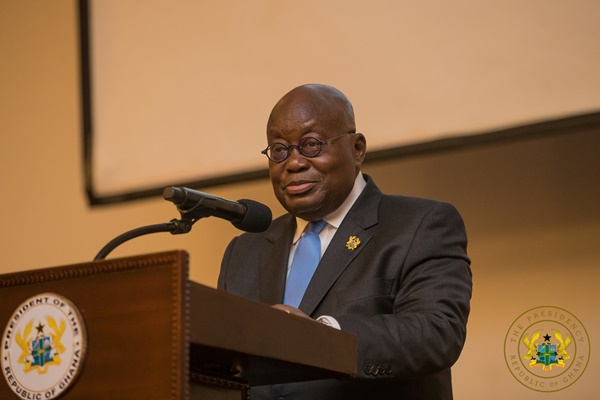 President Nana Akufo-Addo has said that there is no justification for overthrowing a democratically elected government in West Africa through coups.

He explained that “these military interventions are never a panacea for addressing whatever challenges a nation may be confronted with.”

Speaking at the presentation of his New Year greetings to the Diplomatic Corps at the Peduase Lodge in Aburi in the Eastern Region on Wednesday, President Akufo-Addo mentioned the economy and security as factors for coups in West Africa.

Although President Akufo-Addo acknowledged the reasons for coups, he, however, said that “no reason is good enough to dispense with the freely expressed will of the people.”

He reaffirmed his stance that West Africa would remain unsafe until dramatic efforts are taken to consolidate and cement democratic precepts, which are required for economic development and freedom protection.

He called on international bodies to support the sanctions that has been placed on African countries that had staged coups.

He believed that when this is done, it would enable countries with military take overs switch back to democracy on the agreed timetable.

On her part, the Dean of the Diplomatic Corps, Mrs Claudia Turbay Quintero praised President Akufo-Addo for the part he played in ensuring that peace and dialogue prevailed among the different groups in the country.

She also commended President Akufo-Addo on how freedom of opinion and freedom of the press in the sphere of ideological difference and respect for the rule of law continue to prevail in Ghana.

“In this regard, we also wish to congratulate you on the classification in 2021 of Ghana as the second most peaceful nation in Africa, after Mauritius, as published by the Global Peace Index.

“We observe how your administration is working assiduously in the reactivation of the economy, moving it towards a high goal of being sustainable and self-sufficient,” she said.

She added that the industrialisation drive, energy, oil and gas and other sectors of the economy are witnessing advancement, all in relation to the President’s vision of a self-sustainable Ghana.

“Your commitment to the education of the youth, with the free senior high school policy, has resulted in very successful enrolment in SHSs, as well as the establishment of STEM centres, with the initiative to empower the youth for global opportunities and the creation of innovation hubs,” the Colombian Ambassador to Ghana, Mrs Quintero noted.

DISCLAIMER: The Views, Comments, Opinions, Contributions and Statements made by Readers and Contributors on this platform do not necessarily represent the views or policy of Multimedia Group Limited.
Tags:
Coups
Mrs Claudia Turbay Quintero
President Nana Akufo-Addo
West Africa