Right To Play receives praises for creative pedagogy as it marks 20th-Anniversary - MyJoyOnline.com 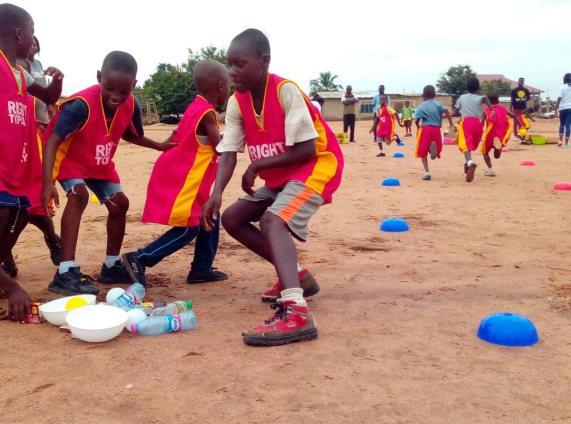 Right To Play has been roundly praised for pioneering innovative pedagogy that has transformed teaching and learning in Ghanaian classrooms.

The organisation employs play-based learning methodology to protect, educate and empower children across the world to rise above adversity.

At a Stakeholder Forum to mark its 20the-Anniversary since its establishment in 2000 last Friday, Country Director of Right To Play Ghana, Josephine Mukakalisa said the organisation is growing stronger by the day and continues to “prepare the children to get a better future.”

She noted that “from 2015 to now we are proud to say that the organisation continues to grow, to get more funding, more supporters, especially more recognition in countries because of the work we can provide.”

Right To Play International was established in 2000 by Johann Olav Koss who was an Olympian athletic.

He is now on the Board of the organisation he founded now led by Dr Kevin Frey as the Chief Executive Officer.

Right To Play works with schools and community-based organisations, train teachers and coaches in its unique play-based learning methodology.

The organisation began its work in Ghana in 2001 operating only in the Greater Accra Region but has now spread to two other regions namely Volta Region and the Northern Region. Right To Play presently operates in seven districts.

Singling out their works in the country, Madam Mukakalisa said Right To Play has strengthened and reinforced its collaboration with the Ministry of Education in the promotion of quality primary education.

She said, “We are supporting the Ministry of Education; District Education Offices and we are preparing our children to get a better life.”

Impact of Right To Play’s activities

Speaking at the ceremony, Ga South Education Director, Henry Ayettey said the presence of Right To Play in his district has brought about an improvement in the learning outcomes of learners.

Mr Ayettey said teachers now use games to whip up the interest of people during “lessons [and] their teaching methods have been improved through capacity building.”

Also speaking, the Tolon Education Director, Sulley Mohammed thanked Right To Play for the wonderful effort in supporting the government of Ghana.

He said, “there is a remarking improvement in all the selected schools, especially bridging of the gender parity.”

Sulley Mohammed also said the play-based learning methodology introduced by Right To Play has brought an improvement in the attendance of both learners and teachers.

“Confidence among teachers and students has also been improved and now the learners can communicate effectively in English,” he added.

On his part, the Keta Municipal Education Director, Victor Kwaku Kovey said Right To Play has helped in promoting supplemental learning among learners in schools under the directorate.

“I want to thank Right To Play for providing mobile vans [that are being used in the municipality.] This is a very good measure because it is helping our learners to access reading materials,” he said.

The partners of Right To Play include WaterAid, UNICEF, The LEGO Foundation, Mondelez, and Global Affairs Canada, among others.