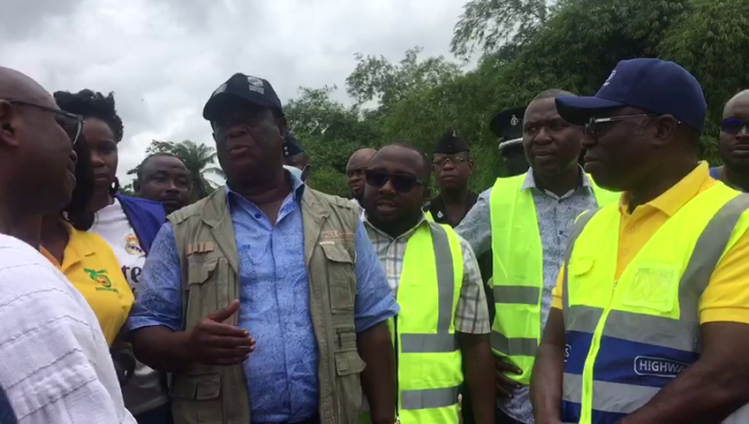 The Roads and Highways Minister, Kwasi Amoako-Attah has started touring bridges and roads in some parts of the Central Region.

This visit follows the collapse of some bridges in the region due to a series of flooding incidents.

Over the weekend, a part of the bridge linking Cape Coast to Twifo Praso caved in, rendering many motorists stranded.

Videos and photos sighted by Myjoyonline.com show a section of the road has completely caved in.

In an interview with JoyNews’ Richard Kwadwo Nyarko, residents said that part of the bridge caved in because a river known as Surowi had overflowed its banks.

The bridge is known to serve motorists from Cape Coast to Jukwa and also from Dunkwa-On-Offin.

Touring the areas, the Minister said the broken bridge has been temporarily fixed.

He, however, noted that a team of engineers have been established to critically assess the situation and provide a sustainable remedy.

“There is a temporary reinstatement of the road, that is why I came here with all my engineers from Accra. All the heads of the Agencies are here and it is not because I want to come here with a huge entourage but engineering work requires professionals putting their heads together to find the best solution.

“You [journalists] can attest to it that they have been going round asking questions, assessing the situation so that by the time we return, they will be able to advise government for us to implement,” he said.

The Minister further gave the assurance that government will see to the implementation and completion of a durable bridge.