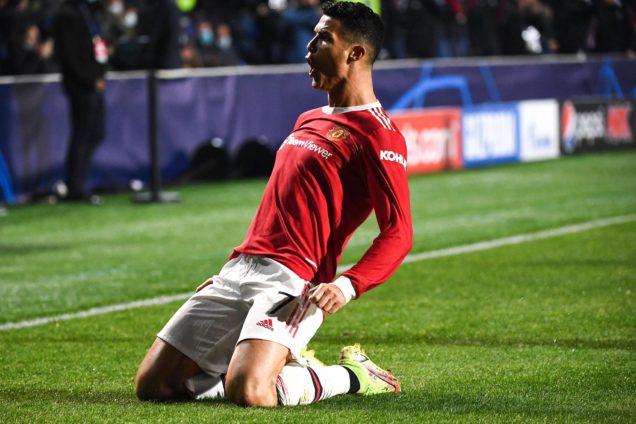 Cristiano Ronaldo once again rescued Manchester United with a sensational late goal to earn his side a draw against Atalanta that keeps them top of Champions League Group F.

The 36-year-old, who also levelled in first-half added time, volleyed in from outside the box in added time for his second of the night to earn United a crucial point in Bergamo.

Josip Ilicic opened the scoring with a low effort that squeezed under David de Gea at a vociferous Gewiss Stadium and Atalanta thought Duvan Zapata’s 56th-minute effort had won it.

Ronaldo capped a wonderful move by firing beyond goalkeeper Juan Musso for his first following a delightful Bruno Fernandes back-heel, after Ole Gunnar Solskjaer’s side had been on the back foot for much of the first half.

United were also second best after the break but Ronaldo, who scored a late winner in the reverse fixture and against Villarreal, delivered with a vital goal to keep United in pole position heading into the final two group games.

At 2-1 down, United were sitting third in the group and facing the prospect of going out if they lost to Villarreal in their next fixture, but now a win would see them through with one game to spare.

Many have questioned the impact of Ronaldo’s return to United, but the Portugal great has proved in Europe’s elite club competition there is no-one better for producing when it matters.

Ronaldo has scored in each of United’s group games, netting crucial winners, and once again showed his desire to rescue his side with an instinctive volley that found the bottom corner in the 91st minute.

United had struggled to impose themselves on the fixture but they also produced the move of the match for Ronaldo to grab his first, pouncing on Fernandes’ deft touch to level after a first half in which Solskjaer’s side had battled to keep the hosts at bay.

United’s victory at Tottenham on Saturday was supposed to be a pivotal moment for Solskjaer, with Spurs boss Nuno Espirito Santo losing his job and Solskjaer’s tactical tweaks suggesting a far more solid and resilient Reds side existed to the one thumped 5-0 by Liverpool a week earlier.

The Norwegian stuck with a three-man defence for the trip to Bergamo, but the system could not account for a costly error from goalkeeper De Gea, who let a seemingly comfortable effort from Ilicic slip beneath him 12 minutes in after smart work on the left from Zapata.

It was the ninth time in the 14 matches under Solskjaer in the Champions League they have conceded first and livewire forward Zapata had a huge chance to double the Serie A’s side lead on the half-hour mark after Paul Pogba gave the ball away on the edge of his own box, with Eric Bailly making a vital block.

When centre-back Raphael Varane went down injured soon after, Solskjaer abandoned the three-man defence to instead bring on forward Mason Greenwood and it worked almost instantly as the substitute combined with Fernandes and Ronaldo in the sensational move that saw United level.

But they were unable to wrangle the momentum after the break and Zapata ran clear to flick beyond De Gea, despite Harry Maguire thinking the goal, awarded after a lengthy VAR check, was initially offside.

It was Atalanta who looked more like adding to their lead, but Ronaldo has become accustomed to bailing out his side in the Champions League.

The leveller was his 127th goal in all competitions for United and not only saw him overtake Solskjaer in the club’s scoring charts but also helped ease the pressure on his former team-mate and now manager.