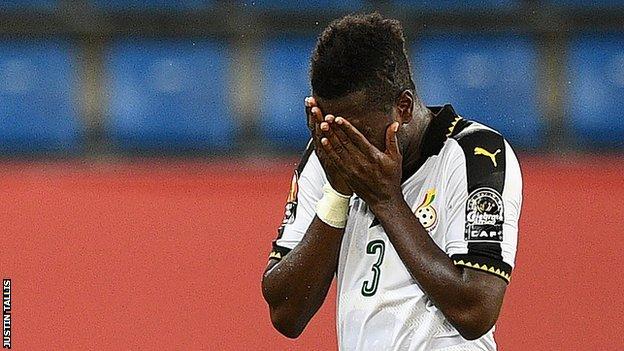 Sammy Kuffour, who is a member of the Black Stars management committee, has made mention of his disappointment with Asamoah Gyan over the former striker’s comments on the Black Stars squad for the Nigeria clash.

After a prolonged delay, the football association released names of players selected by head coach Otto Addo, for Ghana’s double-header versus Nigeria. And as has been the case, commentary on the squad followed right after and the all-time top scorer of the national team joined in on the act.

Taking to his twitter account, Gyan questioned the continuous absence of Anderlecht midfielder Majeed Ashimeru, who after missing out on Ghana’s final 2021 AFCON squad, has been left out once again.

The 35 year old later deleted the tweet but it had already spark waves on social media and within Ghana’s football community, and Kuffour has voiced his displeasure with Gyan.

“He has his personal view on certain players as a human being but put that aside and go to the coaches, they have monitored every player. How many matches has Ashimeru played and not been invited? Asamoah Gyan is part of Ghana, he has captained this team so my little advice is that when things like this happen, you can call one or two people. But when you put it on your page and using the word ‘nonsense’ I don’t think it’s fair.

“You can go on and say what you want to say but certain words are not appropriate to use,” the ex-Black Stars defender said in a Kessben FM interview.

Gyan before taking down the tweet, penned an apology on twitter indicating he was ‘carried by his emotions’.

DISCLAIMER: The Views, Comments, Opinions, Contributions and Statements made by Readers and Contributors on this platform do not necessarily represent the views or policy of Multimedia Group Limited.
Tags:
Asamoah Gyan
Majeed Ashimeru
Sammy Kuffour