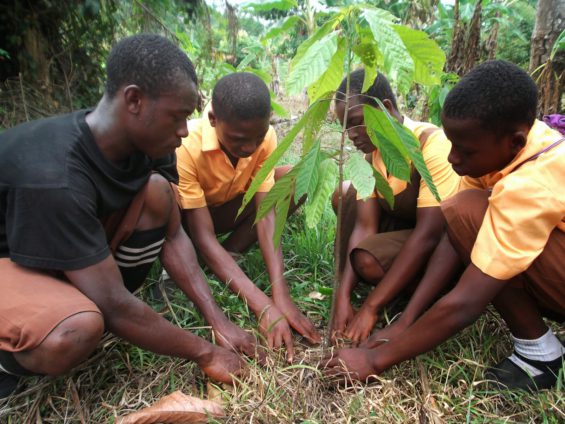 As part of efforts to reduce carbon footprint and preserve the planet, some school children have been engaged in tree planting exercises in the Ashanti Region.

The initiative of the Forestry Research Institute of Ghana (FORIG) aims at encouraging young students to protect and preserve the environment.

The success or failure of COP26 lies in the hands of world leaders.

They are trying to reach an agreement to avoid catastrophic climate change, as the two-week world summit ends.

At the Asokore Mampong in the Ashanti region, some students are contributing to the fight against climate change.

Every student here is taking part in an exercise to protect the environment.

Many schools have already benefited from the Forestry Research Institute of Ghana’s (FORIG) initiative.

“We all have experienced climate change. Temperatures are rising while rainfall patterns are becoming erratic,” says Dr. Gloria Djaney Djagbletey, a senior research scientist at FORIG.

Dr. Djagbletey says the effect is known but action is needed to mitigate it.

The students say they will commit themselves to protect the environment.

The last day of the international COP26 negotiations aimed at curbing catastrophic levels of global warming.

The final served to resolve disagreement on the content of the final document and serve as a guide for the global fight against climate change.

Every country must reach an agreement on each word of the text.

Summit organizers have issued an initial draft of an agreement calling on countries to “revisit and strengthen” their plans to reduce greenhouse gas emissions by the end of 2022.

It also calls on them to “accelerate the phasing-out of coal and subsidies for fossil fuels.”

If it remains in the final version, the language on coal and government fossil fuel subsidies would be a first for the United Nations climate agreement.

Money is one of the big differences in the final negotiations.

Rich countries have failed to deliver $100 billion a year by 2020, as promised, for poor and middle-income countries to shift their energy systems away from fossil fuels and adapt to the impacts of climate change.