Security beefed up for smooth conduct of 2021 WASSCE - WAEC - MyJoyOnline.com

Security beefed up for smooth conduct of 2021 WASSCE – WAEC 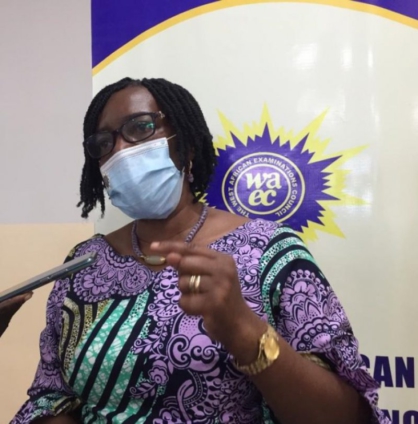 Head of National Office of West African Examinations Council (WAEC), Mrs Wendy E. Addy-Lamptey, has assured that security arrangements have been beefed up to ensure the successful conduct of the examination.

She appealed to supervisors and invigilators to be guided by the rules of examination and to be vigilant in carrying out their duties as expected.

Speaking at a press conference in Accra to provide update on the conduct of 2021 WASSCE for School candidates, Mrs Addy-Lamptey said the Council has received tip-offs from some concerned citizens about some teachers, who have hatched plans to collect monies to enable candidates to cheat during the examinations.

The Head of National Office, WAEC said, “The Council has cautioned the schools in question and would follow up with the necessary actions.”

She said teachers, who in the past misconducted themselves during examinations, were removed from the Council’s list of supervisors or invigilators.

Mrs Addy-Lamptey said curbing examination malpractices is a collective responsibility and urged stakeholders to support the Council to nip the canker in the bud.

She further entreated candidates to comply with all rules and regulations, saying they could write examinations and pass without cheating.

“Let me advise all candidates to comply with the rules and regulations of the examination and the Covid-19 protocols, avoid any form of malpractices which could lead to the cancellation of their results and being barred from taking examinations conducted by WAEC,” Mrs Addy-Lamptey stressed.

She said the operations of rogue websites and WhatsApp groups created purposely for cheating have started.

According to her, “Smart WASSCE Hub” is one of the many WhatsApp groups, which is asking candidates to join for assistance during the examination.

“We wish to caution all candidates to be wary of the activities of such websites which deceive them and turn their attention away from books.

We advise all candidates who have joined such platforms to exit them immediately and concentrate on their studies.”

Mrs Addy-Lamptey said security operatives are on the alert and have assured the Council that they are working to bring these perpetrators to book.

This year’s WASSCE for School candidates is being administered to 446,321 candidates from 965 schools.
The schools are made up of 651 public schools and 314 privates schools across the country.

This year’s WASSCE commenced in 763 centres with some candidates starting with the Visual Art Project Work.
The examination would officially end on Friday, October 8, 2021.