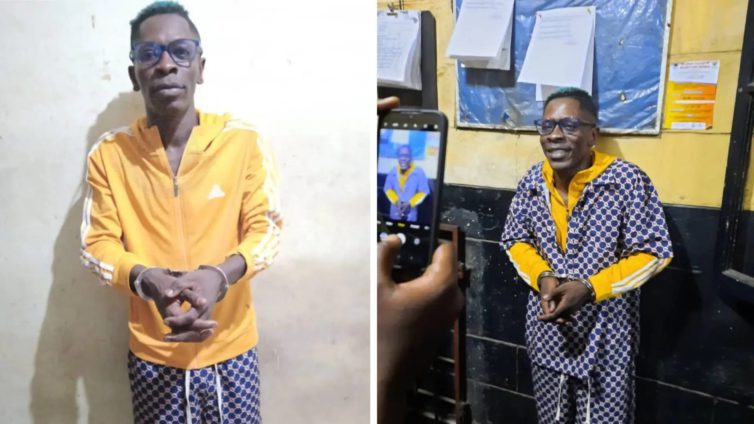 Since the Police announced the arrest of Reggae/dancehall artiste, Shatta Wale, social media users have not been at ease.

With over 49,000 tweets, the self-acclaimed Dancehall King has been trending number one on Twitter since Tuesday evening.

According to reports, the ‘My Level’ hit maker turned himself in after the Police declared him wanted.

The singer, born Charles Nii Armah Mensah, embarked on what has now been confirmed as a prank on Monday claiming he has been shot by unidentified assailants.

The police after a one-day manhunt. Police earlier issued a statement on the arrest of two other suspects; Kojo Owusu Koranteng and Eric Venator, for allegedly spreading false information on an alleged gunshot attack on the musician, with the intention to cause fear and panic.

While some users trolled the singer over this arrest, others called on Ghana Police to free him.

Why is Shatta wale happy in the police custody 😂😂 aah 😂😂🤣

It is the dressing for me🤣🤣🤣. Arh, Shatta Wale paaa, coz he knows he go bed for cells tonight he carry pyjamas all go🤣🤣🤣. pic.twitter.com/rUuwECLIZc

Shatta Wale is too funny 🤣😂 pic.twitter.com/ujaeqQ5AsW

Shatta Wale off me 😂😂😂 pic.twitter.com/kVoELBjh1w

I don’t support what Shatta wale did but to come out and say Shatta wale need this kind of hype for his upcoming album be total nonsense. An album that featured the likes of Beyoncé, vybz Kartel, meek mill , Stefflondon and many more international artists !!

Shatta Wale 😂💔 is a real 1Don even in chains pic.twitter.com/9JnNhb1LPw

Ei nnipa ny3 ooo !! Under GH police post of shatta wale been arrested, all the tweets are “why handcuff shatta wale” I came here and no one is asking same. Eii hmm

DISCLAIMER: The Views, Comments, Opinions, Contributions and Statements made by Readers and Contributors on this platform do not necessarily represent the views or policy of Multimedia Group Limited.
Tags:
Charles Nii Armah Mensah
Shatta Wale
Social Media users