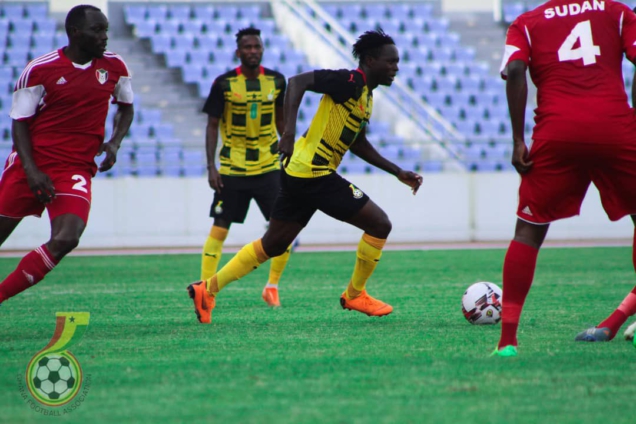 After beating Sudan 2-0 in Cape Coast, Ghana travel to Omdurman where they will be hosted by the Falcons of Jediane.

A win for Ghana will see the Black Stars top Group C with 12 points and book qualification for the African showpiece in Cameroon.

Here’s what to expect from Omdurman on Tuesday.

The Black Stars are currently sitting top of Group C with nine points and with Sudan’s poor home-record coupled with the return of key players for Ghana, they look next after Senegal and Algeria secured qualification for the 2021 Africa Cup of Nations (AFCON).

South Africa currently remain second with nine points after four games, and they are followed by Sudan who have three points in three games. A victory against Sudan will all but confirm Ghana’s participation in the continental showpiece which takes place in Cameroon in 2022.

The 2-0 victory over their Sudanese counterparts did enough to cover a very questionable performance especially, in the midfield where things did not exactly work out for the Black Stars but coach, Charles Akonnor cannot carry all the blame.

Thomas Partey, Mubarak Wakaso and Jeffery Schlupp form part of a squad who were unable to honour the 1st leg against Sudan for various reasons. Though Thomas Partey is still out of contention, Akonnor has the luxury of Mubarak Wakaso and Schlupp meaning, players like Lomotey might miss the cut for a starting berth.

The four-time Africa Cup of Nations champions might lack some incisiveness upfront as captain, Andre Dede Ayew, who rallied his side to a win in Cape Coast, will miss the game after suffering an injury in training.

Thomas Partey, the deputy captain of the Black Stars has still not been able to join the squad after sustaining an injury in Arsenal’s Premier League defeat to Aston Villa.

The next in line, Richard Ofori, is set to also miss the encounter due to suspension. The goalkeeper picked up a second yellow card in the first leg against Sudan.

With all 3 captains of the Black Stars out, the team might still not lack any leaders, with Mubarak Wakaso joining the squad and looking likely to assume the role of captain.

The Falcons of Jediane were beaten in Cape Coast but the Black Stars did not have it easy as the scoreline might suggest.

In the early parts of the second half especially, they mounted lots of pressure on the Black Stars with striker, Mohamed Abdelrahman, proving to be a difficult match-up.

Abdelrahman had a decent penalty shout following a clumsy challenge from John Boye.

Sudan also looked to play on the counter in Cape Coast and anytime they did, the defence of Ghana looked very unsettled. Coach Velud’s men will be aiming to push matters at the El Hilal since they need three points to keep hopes of qualification alive.

It’s the first time a goalkeeper not named Richard Ofori will be in post for the Black Stars.

The last goalkeeper to feature in a competitive game bar Richard Ofori was Razak Brimah, who since Ghana’s 2-0 defeat to Cameroon at the 2017 AFCON, has not made any appearance for the side after insulting Ghanaians on social media.

Richard Ofori has since been the number 1 goalkeeper for the Black Stars for the past 3 years.

The Black Stars currently have within their ranks, Razak Abalora, Lawrence Ati-Zigi and Fatau Dauda who recently re-joined the national team setup.

Razak Abalora has received four call ups for the Black Stars and since featured in just one game so far which was in Ghana’s 5-1 win against Qatar.

Lawrence Ati-Zigi has also made 4 appearances for the Stars after making his debut in June 2018 against Iceland. His last game was a 3-0 defeat to Mali in a friendly last month.

The most experienced among the trio, Fatau Dauda will be hoping to make a return to the Black Stars starting lineup. It’s likely coach Akunnor will opt for experience, meaning, Dauda might be set to make a Black Stars appearance for the first time since November 17, 2015.

DISCLAIMER: The Views, Comments, Opinions, Contributions and Statements made by Readers and Contributors on this platform do not necessarily represent the views or policy of Multimedia Group Limited.
Tags:
AFCON 2021 qualifiers
Benaiah Elorm Dafeamekpor
Black Stars
Black Stars squad
Sudan