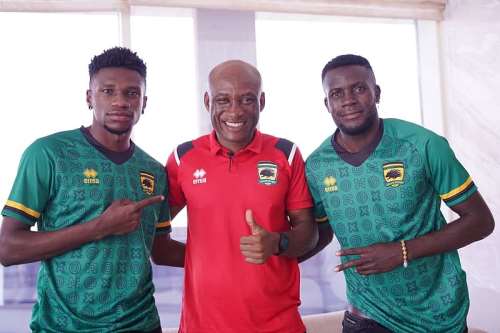 With two weeks to go until the start of the 2021/22 Ghana Premier League, Asante Kotoko confirmed the signing of Cameroonian forwards, Franck Etouga Mbella and Georges Mfegue.

The two players joined from AS Fortuna and Avion Academy respectively, both teams in Cameroon’s top-flight.

Joy Sports’ Kweku Lawrence tells the story of how the two players have been key to the team’s incredible form this season.

Despite finishing as part of the top five top-scorers in Cameroon’s Elite One league the season before, there were some doubts about the impact the duo were going to make in Ghana’s top-flight especially for a club, as huge as Kotoko.

Until the matchday four fixture against Eleven Wonders, neither of the two had tasted any minutes in the Premier League despite being on the club’s pre-season tour in Dubai.

Mfegue, 24, made his debut against Wonders while Etouga’s first appearance came a week later against Karela United on November 28.

Three months after their debuts, the duo seem to be the drivers for Kotoko’s chase for a 25th league title, and the club’s first since the 2013/14 campaign.

Prosper Ogum Narteh’s men have scored 26 goals this term and the Cameroonian internationals have accounted for 57.7% of those goals.

Etouga and Mfegue have a total of 15 goals between them since they opened their scoring account in Ghana’s top flight. While Mfegue has four goals, Etouga has an impressive 11 to his name. The latter has reached that figure in just 10 starts for the club.

They may be Lions, but during a period where the Indomitable Lions needed men to step up and deliver for them in their quest for a sixth Africa Cup of Nations title, the pair were making headlines in the Premier League as Porcupines.

It is also worth knowing that only Dickson Afoakwa has scored for the Porcupine Warriors in the top-flight aside Etouga or Mfegue in their last six games. During that time, the Kumasi-based side have scored 10 goals with the Cameroonian imports accounting for nine of them.

Etouga’s hat-trick on Saturday against Accra Lions makes him the first Kotoko player since Opoku Afriyie (1975) to score more than one hattrick in a single season in the GPL era.

With the kind of performances being displayed by these two week-in-week-out, they look certain to give Kotoko another league title while Etouga will be looking to become the first foreigner to win the Ghana Premier League top-scorer award.

Up next for the duo is a trip to Accra on Sunday, where they play Accra Hearts of Oak in the league’s only outstanding game from the first round.