‘The economy is on a path of unsustainable debt’ – Haruna Iddrisu 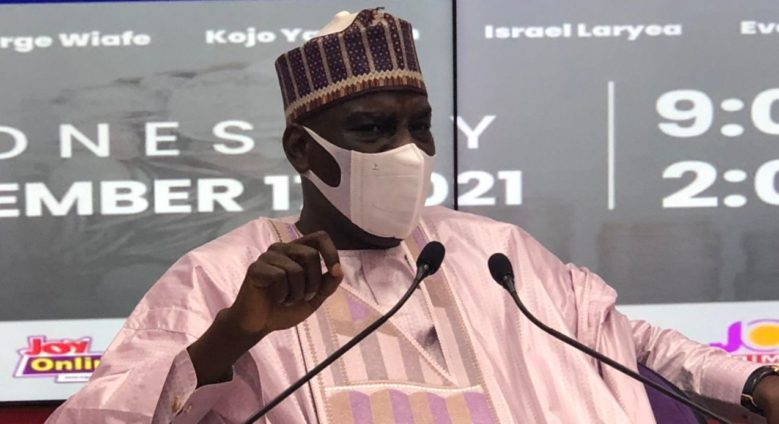 Minority Leader in Parliament, Haruna Iddrisu, has decried what he terms as the mismanagement of Ghana’s economy and the unsustainable debt hole the Akufo-Addo-led government has plunged the country into.

Speaking on Joy FM’s Super Morning Show ahead of the 2022 budget presentation on Wednesday, the Tamale South MP blamed the current administration for “irresponsible borrowing” and expenditure of the taxpayer’s money.

According to him, the country’s increasing fiscal deficit can equally be attributed to the ‘huge sums of money’ the state spends on hiring private jets; a situation he believes has resulted in economic hardships in the nation.

“When you have almost 40% of government revenue dedicated to interest servicing, that country can only be on an unsustainable path to the management of its debt. When you take taxes and it’s about bathing and flying in the air with profligate expenditure on presidential jets and presidential-rented jets, that is not responsible spending; nobody should attempt to justify that.”

“Take a statutory fund like the Ghana Education Trust Fund (GETFund); they are raking in GH¢1.2 billion to GH¢1.4 billion. Out of the GH¢1.2 billion to GH¢1.4 billion, GH¢680,000 will be used to service debt. That is reckless borrowing, irresponsible borrowing, particularly so when you ignore its governance institution – a minister, a board – and you go to create another private sector vehicle called ‘Daakye’”, he bemoaned.

Haruna Iddrisu noted that the public debt is likely to pile up, considering the rate at which the ruling administration has borrowed in recent time.

“Nana Addo Dankwa Akufo-Addo, according to the Auditor General, inherited a debt of GH¢120 billion. As of yesterday [November 16], he had increased Ghana’s debt portfolio to GH¢335 billion, 76% of GDP.”

“So, this economy is on a path of unsustainable debt, they will continue to spend huge sums of money as I have indicated, close to 47% of tax revenue on debt servicing.”

Meanwhile, ahead of his presentation of the 2022 budget, the Finance Minister, Ken Ofori-Atta has indicated that the budget will be heavy on job creation and entrepreneurship.

A cross-section of interest groups including several labor unions and business associations have since warned against the expected removal of port clearing discounts on some selected goods.