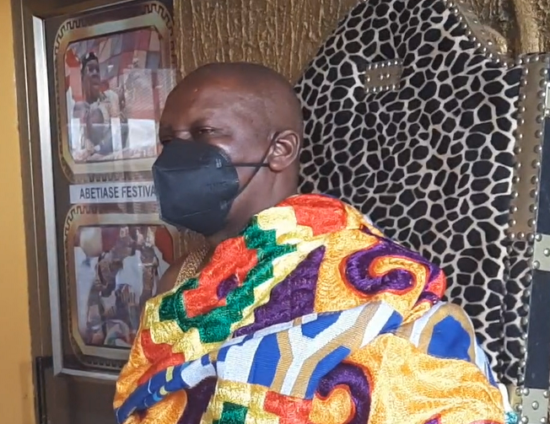 The Goaso paramount chief, Nana Akwasi Bosompra, has called on traditional and political party leaders to desist from interfering in the works of the Metropolitan, Municipal and District Chief Executives (MDCEs).

He explains that any interferences with the works of the assemblies put the Chief Executives in a confused state thereby impacting on the discharge of his or her duty to the benefit of the larger community.

“Why should some chiefs and party executives insist on their consent being sought in the endeavors of the assembly?”, he asked.

He said the MMDCEs have their roles just like them, and these roles are expected to be discharged without fear or favor, or interference.

This, according to the Goaso chief, has contributed to the delay in the naming of the MMDCEs because some chiefs and party executives continue to lobby for people who would do their bidding.

Nana Akwasi Bosompra opined that since auditors only audit, the MMDCEs and the assemblies, should be allowed to function to the benefit of all.

“As human as they are, when they go wrong, it’s ok to call their attention to it but don’t attempt to control them against what the constitution permits”, he advised.

The GoasoManhene was speaking at a durbar in honor of President Nana Akufo-Addo at Goaso, on Friday, August 13, 2021, on the final day of his two-day tour of the Ahafo Region.

He, however, advised government appointees to work hard to justify the confidence placed in them by the President and also urged chiefs, party members, friends and relatives, and the general public to desist from their unrelenting requests.

As a cocoa growing area, Nana Akwasi Bosompra expressed his frustrations with the cocoa board’s inability to construct the Goaso town roads and appealed to the President to step in to fix the many deplorable roads in the municipality.

“I understand an asphalt road is to be constructed from Tepa to Mabang in the Ashanti region. It will be sad if it does not continue to Acherensua, Goaso, and nearby towns in the Ahafo region”, he noted.

The President, Nana Akufo-Addo, explained that aside from his visit aiming to thank the chiefs and people of the region for their votes in the last general elections, it is also a chance to hear their concerns and solve them.

He promised to provide a bus for the Goaso nursing training college.

He also appealed for patience as his government takes steps amidst the covid-19 pandemic to raise funds to execute their developmental needs, including the roads.

He said the raging issue of galamsey and the increasing number of people in Hwidiem requires a corresponding police presence, hence appealed to the President for a police station.

Earlier, Osuodumgya Barimah Appia-DwaBoafo II, chief of Hwidiem in the Asutifi South District, applauded the President and his government for the many social intervention policies.

He further requested the expansion of the Hwidiem hospital and the construction of their roads.

The Hwidiem chief pleaded with the President to help the District Education Office to retrieve their official vehicle seized by the court over nonpayment of classroom furniture supplied.

Ahead of the inauguration, Osuodumgya Barimah Appia-Dwa Boafo II, the Hwidiem chief, thanked the President for the massive infrastructure support extended to the school which he said is aiding effective teaching and learning.

He, however, said their challenge is the dusty and muddy compound, depending on the season, and therefore appealed to President Nana Akufo-Addo to tar the school compound for them.

The President also paid a courtesy call on the Paramount Chief of Kukuom and inaugurated the Asunafo South District Assembly Office Complex at Kukuom.

He also inspected the work done on the first phase of the Ahafo Regional Coordinating council office complex set for completion in December, and the 21.5km Nobekaw-Sankore road which runs through major cocoa growing areas such as Kwapong and Asempanaye, before ending his two-day tour of the Ahafo Region.

Deputy Minister of Youth and Sports, and MP for Goaso, Evans Opoku Bobie, Minister of Employment and Labor Relations, Ignatius Baffour Awuah, MPs, government appointees, including some national, regional, and constituency executives of the NPP were among the President’s entourage.