Trump was not exonerated by my report, Robert Mueller tells Congress

US President Donald Trump’s claim that he was “totally exonerated” by special counsel Robert Mueller was rejected by Mr Mueller in a hearing on Wednesday.

Mr Mueller said he had not exonerated Mr Trump of obstruction of justice.

However Mr Trump criticised Mr Mueller’s performance and said: “This was a great day for me.”

Mr Mueller spent two years probing alleged collusion between the 2016 Trump campaign and Russia, but did not establish collusion in a crime.

However he concluded that Russia interfered in the election on Mr Trump’s behalf.

In all, 35 people and three companies were charged by the special counsel on matters relating both directly and indirectly to alleged Russian interference in the 2016 election. No members of the Trump family were charged.

Mr Mueller – a former FBI director – and his team concluded that they were unable to charge the president with a crime, but could not exonerate him either.

What did Mr Mueller say?

Across two Congressional hearings, Mr Mueller repeatedly declined to stray outside of confines of his 448-page report, generally giving clipped answers or referring committee members back to the text of his findings.

He appeared at times to struggle with the proceedings, amid convoluted and detailed questioning from House committee members about various parts of his team’s 448-page report.

The questions focused largely on Mr Mueller’s investigation of President Trump and his decision to say he could not exonerate the president of obstruction of justice, but Mr Mueller repeatedly stressed the importance of concerns over ongoing Russian interference in US democracy.

“Over the course of my career, I have seen a number of challenges to our democracy. The Russian government’s effort to interfere in our election is among the most serious,” he said.

He added: “Much more needs to be done in order to protect against this intrusion, by the Russians but others as well.”

What reaction has there been?

Mr Trump called it a “great day for the Republican party” while the White House called Mr Mueller’s testimony an “epic embarrassment for the Democrats”.

However, Democrats said they would go to court to enforce a subpoena of former White House counsel Don McGahn and seek access to grand jury material in the Mueller report.

How did Mr Mueller’s testimony unfold?

The Democrat House judiciary committee chairman Jerold Nadler opened questioning on Wednesday by asking Mr Mueller whether Donald Trump had been accurate to claim he was “exonerated” by the special counsel report, to which Mr Muller replied with an emphatic “No”.

Mr Mueller also reiterated that the special counsel team had found evidence that the Russian government interfered in the 2016 US election with the aim intention of benefiting then-candidate Trump.

Neither the rejection of Mr Trump’s claim to have been exonerated nor the confirmation of Russian efforts to benefit Mr Trump were new revelations, but the power of having Mr Mueller state them categorically under oath represented early successes for the Democratic committee members. 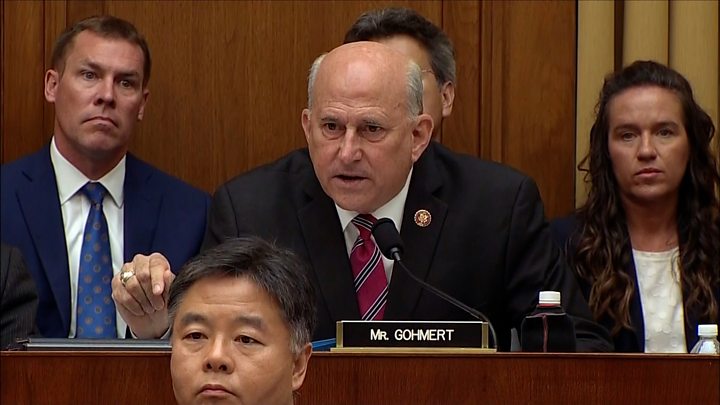 As the questioning went on, Mr Mueller appeared uncomfortable at finding himself in the middle of a political battle between Democrats and Republicans – a situation he had made clear he wanted to avoid.

Republican members attacked the former special counsel’s decision to neither accuse nor exonerate the president of obstruction of justice. Congressman John Ratcliffe said the decision held the president to a different legal standard than the established presumption of innocence.

Mr Ratcliffe said he agreed that the president should not be above the law, “but he damn sure shouldn’t be below the law, which is where volume two of this report puts him”.

Mr Mueller began to reply that the investigation into the president was a “unique situation” but was cut off by Mr Ratcliffe. The special counsel report outlines that there is a unique set of circumstances at play, because guidelines issued by the Department of Justice’s Office of Legal Counsel (OLC) state that a sitting president cannot be indicted.

Democratic members of the committee focused on the detail of some of 10 occasions that the special counsel identified as cases in which the president may have obstructed justice. In particular, they focused on the president’s alleged attempt to have Mr Mueller fired.

President Trump’s then-White House counsel Don McGahn gave extensive evidence to the special counsel investigation, telling Mr Mueller’s team under oath that the president had asked him to fire the special counsel, but backed off after he refused.

In May, the New York Times reported that White House officials then asked Mr McGahn at least twice to state publicly that he had never believed the president obstructed justice.

Democratic members repeatedly attempted to draw Mr Mueller into a discussion about impeachment, which his report appears to refer to as “a process other than the criminal justice system to formally accuse a sitting President of wrongdoing.”

But Mr Mueller seemed highly reluctant to confirm that the passage referred to impeachment, or to say whether or not his report was recommending the process.

Mr Mueller said that the special counsel’s office repeatedly requested an interview with the president but was refused, eventually securing some written answers from the president. Pressed on why he did not issue a subpoena to Mr Trump, Mr Mueller said it was because of the length of time it would have taken to go through the courts to force the president to appear.

In the second hearing of the day – in which the questioning was taken up by the House intelligence committee – Mr Mueller was asked what he thought of the president’s praise of Wikileaks, which leaked email from the Democratic National Committee during the 2016 campaign.

“Problematic is an understatement in terms of what it displays in terms of giving some hope, or, I don’t know, some boost to what is, and should be illegal activity,” Mr Mueller said.