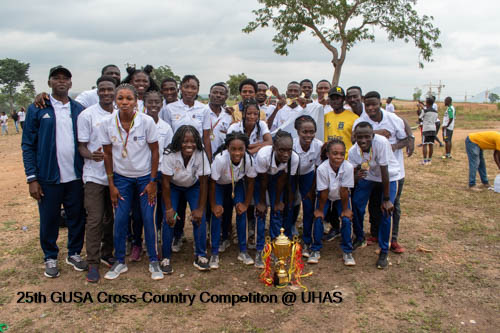 The GUSA Games which were subjected to a three-year moratorium were ushered in with a 10-kilometre race.

It was hosted on the campus of the University of Health and Allied Sciences in Ho and contested by 10 Universities.

The University of Education, Winneba (UEW) and University of Development Studies (UDS), won the second and third positions respectively in the female category with 65 and 118 points.

Sarah Koomson of UDS finished the 10-kilometre cross-country race in 35:25.88 clinching the first position in the female category.

UCC’s Titi Rosina finished second in 36:25.50, with Hilda Bayor who represented UDS completing the race in 38.45.10 to occupy the third position.

William Amponsah of UEW, who just returned from the Commonwealth games in Birmingham without a medal, proved he is one of the best cross-country runners in the country by completing the 10-kilometre race in 29:17.00.

His compatriot from UEW, Atia Koogo won the second position in 29:55.53, Arthur Ishmael who represented UG finished the race in 30:09.41.

The University of Health and Allied Sciences, the host school, could not make their mark as they finished 8th in the male category and 7th, technically the last position, in the female category.

The Registrar of UHAS, Miss Yaa Amankwaa Opuni, appreciated the pivotal role of the School of Sports and Exercise Medicine in ensuring the University hosted the cross-country competition.

She expressed optimism that UHAS would host all the disciplines of the GUSA games when a sporting complex is provided to the University in the near future.

She believes the University would excel in future competitions when the complex is ready to aid participants to prepare well enough for any sporting activity.

The President of GUSA, Ibrahim Tanko, said the association would collaborate with the national authorities to produce athletes who would win medals at the world stage.

He disclosed that KNUST would host the main 25th GUSA games from November 12th to November 19th 2022.