Ukraine war: The school survivor accused of being fake - MyJoyOnline.com

Ukraine war: The school survivor accused of being fake 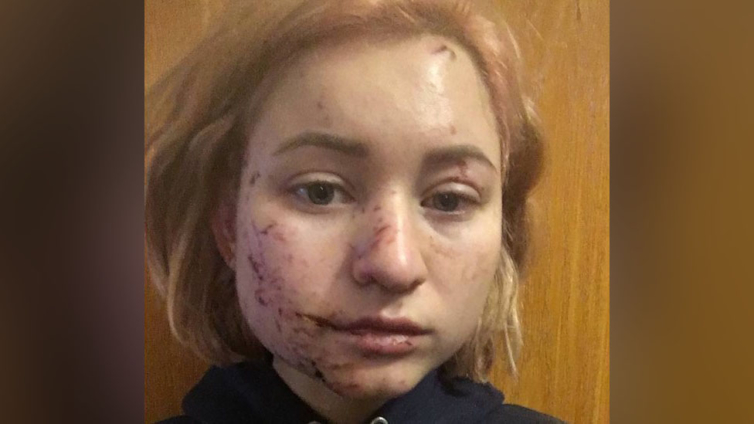 After an air strike hit a school in Chernihiv, a video of a bloodied survivor went viral on Ukrainian social media.

But soon her story was hijacked by pro-Kremlin accounts, including one promoted by the Russian Foreign Ministry, which falsely accused her of being a fake.

“There was no whistle, rustling or sound of shelling,” Tania says. “It just hit the building and suddenly everything went dark. The building collapsed.”

Tania was caught up in an air strike in early March. She was helping sort clothes for a humanitarian aid drive in school number 21 in Chernihiv, north of Kyiv, when a missile hit the building.

Although authorities did not name the school, the BBC was able to confirm the specific building via images posted on the Telegram social media app.

Tania was knocked out by the blast. She says when she regained consciousness, she realised she was alive and could walk. She stood up, looked around and saw people in a state of panic. She also noticed bodies lying on the floor, including that of a woman who had been standing next to her just minutes before the strike.

Scared, she fled to her home.

There, she posted a video on Instagram – still covered in blood and with visible injuries on her face – in which she explained what had happened.

“I was at school number 21 when the explosion happened,” she says in the clip. “I survived. Good luck to everyone. I hope you are luckier than me.

“Why am I recording this story? It’s just that there were many children at that school. I don’t know whether they have survived. Just send this video to all your Russian friends.”

In a matter of hours, her video went viral in Ukraine. The clip garnered tens of thousands of views on Instagram alone, and was picked up by a number of Ukrainian news websites.

Tania told the BBC that she had acquired thousands of new followers and received dozens of messages on Instagram – some supportive, some threatening.

People from Russia were among those who wrote to her. Some of them apologised for the actions of the Russian authorities. But others did not believe her story and called her “fake”.

Soon Tania’s friends started sending her screenshots from Russian and Belarusian media outlets, in which her video was described as a fabrication.

These reports described her as a “pupil”, claimed that the wound on her face was not real, and alleged the blood on her face did not look natural and that she was behaving too “normally” for a person who had just survived a bombing.

The claims were false. Tania is no “pupil” – she is 29 years old and worked as a waitress before the invasion started.

Pictures she took of herself on the second day after the attack – shared with the BBC – clearly show facial injuries consistent with the footage she posted on Instagram.

As for her seemingly calm composure, Tania told the BBC that she was in “deep shock” when she recorded the video.

“I was calm and wasn’t scared. Just shocked,” she says. “A few hours after that, I was in hysterics. For the next two days, I couldn’t eat or sleep, I just cried. It was a nightmare.”

Some Russian reports also claimed schools across Ukraine stopped operating at the beginning of the invasion, and claimed there could not have been many children in the school at the time of the strike.

But the school was being used as a collection point for humanitarian aid and considered a safe place by local residents, Tania says, some of whom had brought their children there.

Officials confirmed that account. Vyacheslav Chaus, the head of the Chernihiv regional state administration, told us the school’s basement was open so that local civilians could hide in case of shelling.