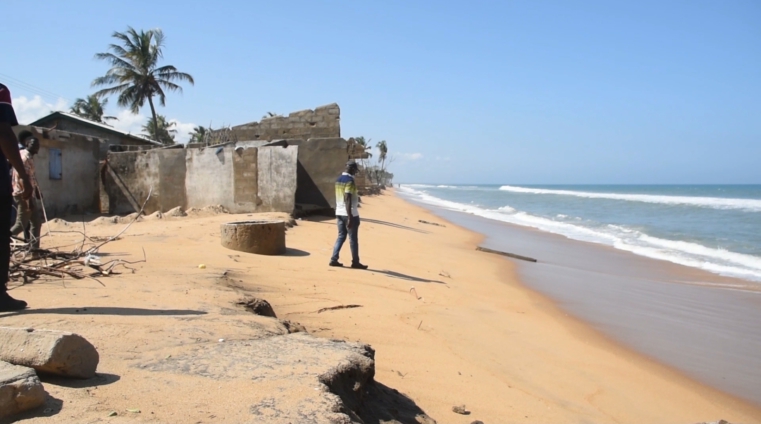 Thousands of residents in Agavedzi, Sarakofe and Amutinu are bearing the brunt of tidal waves devastation on the shores of Ghana.

The affected residents of these communities in the Ketu South Municipality of the Volta Region of Ghana are compelled to put up in makeshift structures.

The structures made of palm fronds and clothes have been erected on dumping sites along the Lagoon.

The development has left some of the victims traumatized, as the sea has consumed all they had toiled for in their lives.

They are not assured of where the next meal will come from, nor where to lay their heads for a good night’s sleep.

A victim, Daniel Kormi Tetteh, said life has been unbearable for them within the last 3 years.

He said about 17 households live in makeshift structures in his enclave, while others are scattered along the Lagoon.

“The sea has swallowed the majority of our communities within the last three years”, he lamented.

Daniel said they have to evacuate the makeshift structures and take shelter in a church when it rains, adding feeding their households has become a challenge.

“There is nothing to eat. We can’t fish, our nets are all torn, this is because the base of the sea is full of the debris of our buildings”, Daniel explained.

A sexagenarian, Afator Bodika, fears they may not survive until the end of the rainy season considering the frequent flooding of the banks of the Lagoon.

“We are settled in between the sea and Lagoon. The entire place gets flooded when it rains”.

“The government must ensure the sea defence wall is extended to protect our communities”, she said.

Community Leaders, therefore, made a passionate appeal to the government to resettle them beyond the Lagoon.

The Ketu South Member of Parliament, Dzifa Gomashie, entreated the relevant institutions to consider the proposal and come out with a suitable resettlement plan for her constituents.

“I think that the Municipal Chief Executive, Regional Minister, Minister for Works and Housing, and Minister for Roads, these four people can come together and help us solve the problem of where the people can temporarily be accommodated, while we look at the bigger picture of the sea defense”, she said.

Madam Gomashie presented some used clothing donated by the Ghana Islamic Mission to the victims.

Residents in tidal waves inflicted communities in the Ketu South Municipality of the Volta Region have re-echoed their call for resettlement.

They are suggesting the government temporally resettles them on parcels of lands beyond the banks of the Lagoon, while it advances plans to extend the sea defense wall to protect their communities.