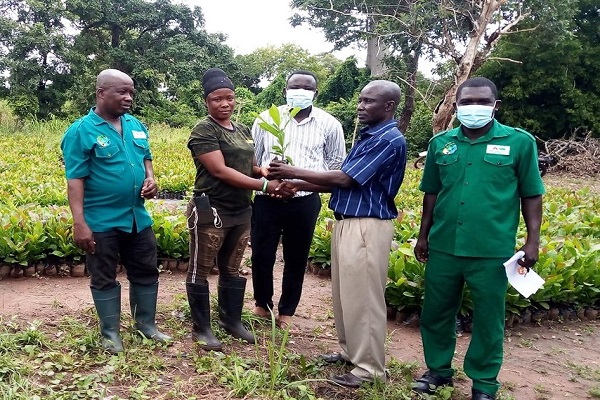 A Deputy Coordinating Director of the Wenchi Municipal Assembly in the Bono Region, Ato Mens, has re-echoed government’s continuous commitment to enhance agribusiness and the success of the Planting for Export initiative.

“This commitment has reflected in the huge investments being made by the government through the introduction of many agriculture programmes,” he stressed.

Mr. Mens said government attaches seriousness to the agricultural sector, hence this intervention to ensure the cashew industry gets the needed boast.

He gave the assurance during a brief ceremony at the Bono Regional town of Nchiraa in the Wenchi Municipality to begin this year’s distribution of improved cashew seedlings to farmers.

The assembly presented over 150,000 improved cashew seedlings to a little over 3,000 farmers in the municipality under the Ghana Productive Safety Net Project (GPSNP).

The project is being spearheaded by the Ministry of Local Government, Rural Development and Decentralisation and co-sponsored by the World Bank and the Government of Ghana.

The MCD emphasised “the free distribution of the improved cashew seedling is to promote rural economic growth and also enhance the foreign exchange earning capacity of the country”.

“These seedlings are given to you the farmers to further reduce the huge cost and burden associated with access to planting materials,” Mr. Mens added.

He therefore encouraged cashew farmers in the area, especially the youth to take advantage of the various agricultural interventions and incentives to increase production and improve their livelihood.

The Wenchi Municipal Information System Officer of the Ministry of Agriculture (MoFA), Alfred Anaman, assured farmers of the continuous provision of extension services and other technical support.

Some beneficiary farmers expressed their appreciation to government, saying “the project has not only enabled us to easily get improved seedlings but also saved us some money”.

In 2020 alone, the Wenchi Municipal Assembly distributed over 100,000 cashew seedlings to farmers notwithstanding the emergence of the Covid-19 pandemic.

DISCLAIMER: The Views, Comments, Opinions, Contributions and Statements made by Readers and Contributors on this platform do not necessarily represent the views or policy of Multimedia Group Limited.
Tags:
Agribusiness
Cashew seedling
GPSNP
Wenchi MoFA